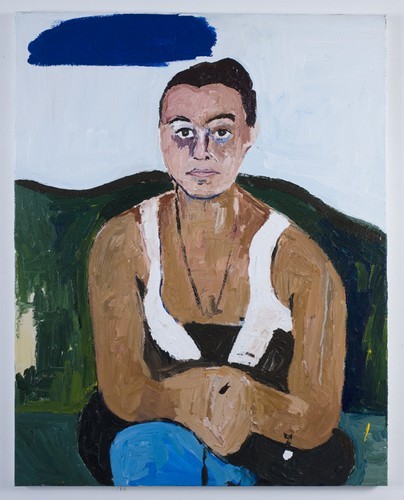 RENTAL is head-over-heels excited to present the work of Henry Taylor and Phil Wagner in a two-person exhibition. It is Taylor’s third exhibition at the gallery and Wagner’s first major showing in New York.

Henry Taylor (b. 1958 Oxnard, California) paints the gritty and the grand. His chilling gestural paintings include narrative scenes, dreamlike interior constructions, urban landscape, and portraits – the subjects of all of which are drawn from the artist’s life. Recently featured in a solo presentation at the Santa Monica Museum of Art, Taylor’s work possess a naiveté that is anything but; instead the paintings and sculptures exude a roughshod sophistication that makes his work some of the most dynamic being made today.
Taylor’s paintings in acrylic on canvas posses an intuitive understanding of space and weight; brushstrokes are both languid and menacing, much like the slow hot anxiety of an east side L.A. afternoon. Somehow the canvas is both full and empty: swaths of color, a fathers arm around his sons shoulders melting into the back of his neck, negative and positive space seeming to switch places before the viewers eyes. Each work bubbles with fractional stories but often told in a foreign seeming language. In Taylor’s paintings the viewer is just catching part of a previous life that happened just before you looked and a future life that will happen after you stop looking. The honesty, materiality and purity of form within Taylor’s figurative world cross over into his sculptural work within the exhibition. Made-up of painted boxes, thrift store furniture, and other found brica-brac there is a commitment to the form of the elements of assemblage, everything is what it appears, but somehow more as well. All the works are distinct documents of a life lived, portraits of friends (including the artists Mark Bradford and Andrea Bowers), snapshots of half deserted streets, remembrances of historical and political figures, intimate moments with lovers.
There is no artifice, only an attempt to document a life in the moment, quickly, before that life rushes past.

Phil Wagner (b. 1974 Chicago, Illinois) is a painter masquerading as a sculptor who creates striking, graphic works of grimy geometric precision. His wall and floor-based assemblages’ combine found construction material, generic soda cans, raw canvas, and pop-culture ephemera. In his first major New York exhibition the Los Angeles based artist has created a series of sculptures that erupt from the walls in a formally minimal manner that manages to sweat out maximum content. The sculptures have an edge that may be refined but still cuts flesh deep and raw.
For this new body of work found wood jousts are painted a minty, neon green and counterpoised as supports for untreated, stretched linen; further support is provided by generic cans of ginger ale, and stacks of phone books. The element of Wagner’s work that which is cosmetic or decorative also has a physical core intrinsic to the work’s ability to function as an object. More plainly, the objects assembled for aesthetic value are also necessary for their physical construction; the interior supports are also the external image. Words have been stenciled on, only to be rendered illegible via fragmentation; Similarly printed materials are deployed, ripped from their context; a Los Angeles Clippers basketball player stares out with a fake smile from the back of a telephone book, his image and the vessel he is on (a phonebook) equally obsolete, Leonardo Di Caprio stares out from an oversized paper, seemingly in blackface. Its original meaning is not destroyed, but employed in a highly ritualized creation of formality from the chaos of images that makes up our contemporary days. Wagner’s work seems constructed with an elegance of motion and a restraint of effort, but within this clear façade resides a fierce visual beast.
www.rental-gallery.com