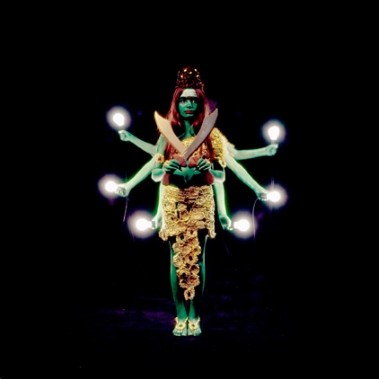 The gallery will present a 3-channel video installation by Lisa Jeannin and Rolf Schuurmans entitled GORILLA GODDESS GANGSTER AND THE GOBLINS (GGG&G). Jeannin, known for her poetic animated films, has collaborated with the Dutch artist and projectionist Rolf Schuurmans to make this film work. As in The Crossing (2005) there begins a traditional narrative sequence conceived out of the studio of a spider that deepens as the story unfolds. The 3 films become clues to a simultaneous perspective compiled by the viewer to complete the fourth stream of images, which lie within our own mental “movie”. The result is a rich complex fable. In addition, the artists have printed five silkscreen prints to compliment this exhibition Matti Kallioinen creates an intriguing fantasy world with striking immediacy with color drawings and a video The Beautiful Robot plus during the opening 10 minute performance. Kallioinen produces different characters, and animating objects based in relational aesthetics. In his installations, the artist aesthetical universe is an intense sensory experience. The use of bright colors heightened with Ultra-Violet lights and pigments are combined with synthesized music/poetry sung from video mouths that complete the figures of flowers or animals. Kallioinen uses methods such as suggestion/illusion and Brechtian Verfremdung that discourages the audience from completely identifying with the music and his characters. This method is a response to an MTV generation that has learned to expect the standard cues from a music performance or exhibition. His artistic imagery questions the conventional notion of the boundaries between fiction and reality. Fredrik Söderberg ́s watercolor paintings are filled with icons of a magical or occult meaning, for example they have a relation to Aleister Crowley, Old Norse runes, smurfs or the scary trees in a Bamse comic book. Meaning in a work of art is never found in separate elements because they are created by the audience’s attempt to bring order to the contradictions. Several of Söderberg ́s compositions play with traditional dichotomies: innocent – brutal, cute – threatening etc, and by doing this, he inscribes himself in the tradition of semiotic terrorism. But while this movement regularly has exercised shallow provocations in attempts to shock and confuse the audience, Söderberg ́s work instead calls for reflection. Lisa Jeannin and Rolf Schuurman’s recent exhibitions include GGG & G at Felix de Boeck, Brussels (BE), VIT<ART>I , Verbeke Foundation, Kemzeke (BE), 12 Piedestals, Scheldapen, Antwerp. The Crossing was presented in the Moderna Exhibition, 2006, Stockholm curated by John Peter Nilsson and Magdalena Malm.