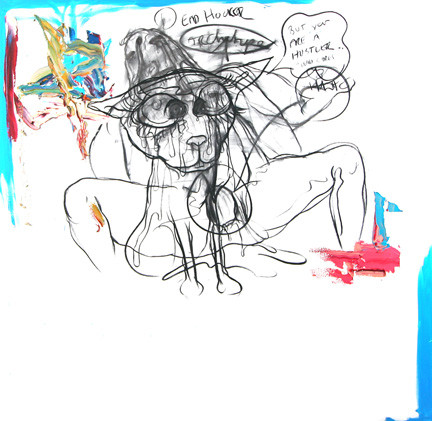 The show “Off The Wall” will include works by gallery artists André Butzer, Christian Ward, Bjarne Melgaard and Tjorg Douglas Beer, all of which just recently had solo shows in Gstaad, and - for the first time - New York artist Maya Hayuk.

Maya Hayuk (1969) has been commissioned to paint a mural which will spread out onto all gallery walls and will serve as painterly humus for the other artists’ works that will be installed on top of it. American artist Maya Hayuk is not simply a painter but designs advertising posters, CD covers, T-shirts and skateboard images, paints on walls of houses, hotel rooms and barns, draws and photographs. Hayuk’s large radius of action is closely related to her interest in collaborations of very different kind. Her works develop their own dynamic out of cooperative projects with other artists and musicians, as well as with a storehouse of forms and images that come from various cultures and contexts. She activates the many different influences and incorporates them into her visual world. A renaissance of pop culture created by flowing movements, strong colour, the use of ornamental and geometrical shapes or organic patterns which sum up to rhythmical and outrageous compositions that lead into a land of fantasy and flower-power. Her painterly inventions are even more overwhelming once one has discovered that no drafts are made beforehand to prepare her large murals.

Speaking of fantasy and the invention of surrealistic or even psychedelic worlds in today’s painting leads over to London based artist Christian Ward (born 1977). 'Landscape' is not even the appropriate term to describe Christian Ward's eye-grabbingly vivid paintings where Technicolor Mountains, caverns and grottoes shimmer with rainbows, cascade with multicoloured waterfalls and are wreathed in iridescent mist. Rather inventing landscapes of mind, he refers to Sixties psychedelic graphic design and is at the same time inspired by ancient Chinese paintings, as well as the latest Japanese animation techniques. Yet for all their phantasmagorical otherworldliness - one critic described them as a cross between Fantasia and The Land That Time Forgot - they are always based on the direct experience of a real place. However, they appear as utopian villages and places or, as Ward puts it, 'these paintings are as much a mental island, an unknowable space that I can do what I want in, but which in the end does what it wants.' In the past, Ward's wanderings have taken him from the mountains of Scotland and across America into the Arizona desert, and some of his more recent paintings have their starting point in Yakushima, an island off the southern coast of Japan. This World Heritage Site with its virgin, swampy jungle and Rocky Mountains plunging into the ocean, is not only scenically spectacular, but also has a personal significance because it is the area where Ward’s ancestors come from and which he had last visited as a child. Christian Ward’s mind maps have aerial views that play with the spatial order and scales of objects or figures and are confused by the quasi complete absence of horizon lines.

On the contrary, Bjarne Melgaard’s and André Butzer’s art works deal with the figure and figurative – each of them out of their very personal perspective. The Norwegian Bjarne Melgaard (born 1967) is an authentic voice in contemporary expressionistic painting. His idiosyncratic, lyrical and transgressive style is close to Jorn and Munch as well as other contemporary colleagues such as Butzer and Jonathan Meese. His expressive language has moved towards the poetic and the abstract. Long known as the provocative enfant terrible of young European painters he used to conceive outstanding installations involving elements from a markedly underground scene ranging from hardcore heavy metal music to allusions to graphic S&M trysts. Bjarne Melgaard’s work has matured with his re-discovery of the basics, painting and drawing. Symbolised by a new alter ego; a little man with a cane and a large head, Bjarne Melgaard literally plays with themes such as identity, self representation and self perception in his works. How the 'I' may speak in several voices or may be several personas at once and how one is able to have several identities, not to mention split (schizophrenic) personalities. Over the years Melgaard created a powerful personal universe - his own mythology is instantly recognisable to viewers familiar with his Œuvre. In the latest works it’s the miniature pig Les Super and the Chihuahua from Melgaard's previous series of works, now present as a faithful, although let down friend. His canvases are composed by the use of mis-matching colours, figures and words enclosed by dominant black lines and autographs that bring back to mind toilet scribbles or speech balloons from comic stripes. Melgaard’s sofa objects come along as innocuous Designer furniture, though it is highliy explosive by being upholstered with fabric created from his drawings. The sofa itself stands in for the boredom of conformity in the bourgeois world whereas Melgaard’s credo is to emphasize the difference, the abnormality.

The German painter André Butzer (born 1973), who lives near Berlin, is widely known for his so-called "Science-Fiction-Expressionism". He explores new abstraction, combining elements of self-made cartoon, mankind-history, child's play and death. Already in the late 1990s he introduced imaginary creatures into his works. This was followed in 2000 by a series of paintings of figures he called “Friedens Siemense” (Peace Siemenses), who’s heads have been separated from their bodies. In his cartoonesque visions, Butzer has often been decontextualising fragments of American and German history. His invented figures resemble empty effigies as loaded symbols that stand in for the loss of innocence, the brutality of history, they are emblems of trauma, romanticism, power and ideology. Influenced by great modern Painters ranging from Ensor to Pollock and Guston, he experiments with the different ways of modern painting ranging from screaming or happy smiling faces in heavily applied reds, blues, yellows and greens to other recent works that are almost completely monochrome grey. Other works are as good as abstract, posing the question of what continuity of motifs and impureness means in abstraction. Often the paint is smeared and dripped across the canvas creating abstract coalescing forms. Conglomerations and figure-like characters seem to emerge from splotches, strokes and curves in the paintings. Nor abstraction neither figuration are considered to be the absolute truth: Butzer balances in between with his own cosmos of images.

The Œuvre of Tjorg Douglas Beer (born 1973) corresponds a provisional mounted universe of political footnotes, aesthetic symbols and auxiliary constructions. He works in installation, video, sculpture, performance, photography, and collage. Beer is interested in the mechanisms of the “brainwashing” of contemporary society through the steering and manipulation of the individual. He uses humour and playfulness to engage the viewer with themes that are aggressive and violent. His large-scale collages are created from materials including duct tape, Sharpies, plastic tapes, lacquers, and aluminium foil. They depict apocalyptic landscapes marked by fire, smoke, skulls, barbed-wire fences, rockets, towers, and tanks. Beer’s pictorial vocabulary is at turns tragic and militaristic, while his handling of materials lends the work a sense of levity and absurdity. His collages, the motorised aluminium-cardboard-installations and the paintings on plywood build up to a dense grid of references, which range from senseless rhetoric in modern society to archaic computer aesthetics up to classical themes in art history. He is also known for co-founding and running Ausstellungsraum Taubenstrasse 13 in Hamburg, an alternative project space that maintained a bi-weekly exhibition program from 1999 - 2004
www.rental-gallery.com