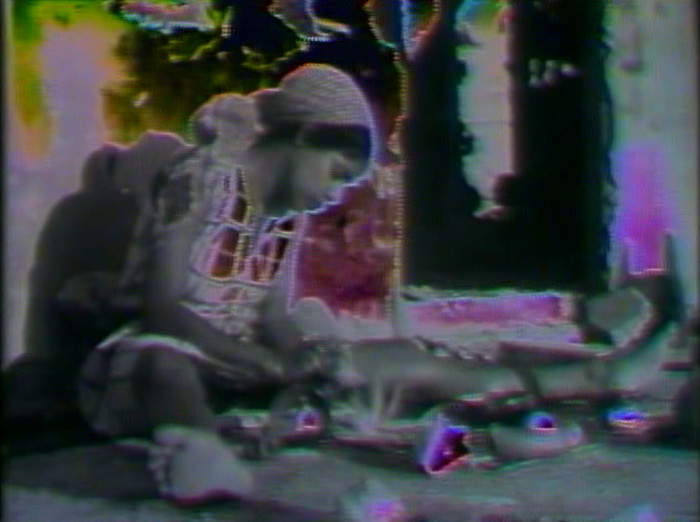 Roberts & Tilton is pleased to present an exhibition by Los Angeles based filmmaker Barbara McCullough. McCullough will screen her historic 1979 documentary Shopping Bag Spirits and Freeway Fetishes: Reflections on Ritual Space, an hour long video about the role of ritual in art. Through conversations with friends such as David Hammons, Senga Nengudi and Betye Saar, McCullough explores this elusive topic.

Set to the otherworldly Jazz of Don Cherry, Shopping Bag Spirits opens with a series of filmic fragments cut from McCullough’s avant-garde masterpiece Water Ritual #1: A Rite of Urban Purification (1979). Following this footage is David Hammons, who speaks about ritual while making an earthwork sculpture out of dirt and debris found in an empty city lot. Elsewhere artist Senga Nengudi performs Freeway Fetishes (1978), a piece in which she and six friends (including McCullough, Hammons, and Maren Hassenger) don nylon mesh headdresses underneath a freeway overpass and enact a ritualistic dance. Other artists featured in the documentary are Kinshasha and Houston Conwill; the musical group Freedom in Expression; and poets such as K. Curtis Lyle, Raspoeter Ojenke and Kamao Daood. McCullough’s video closes with Betye Saar discussing how ritual informs her practice.

As a visual record Shopping Bag Spirits speaks to a historical moment in which the desire to tap into a powerful African past was especially strong. But it also speaks to the present, an artistic moment for which McCullough’s questions are as timely as ever. McCullough is associated with the “LA Rebellion,” also known as the “Los Angeles School of Black Filmmakers,” an independent movement that emerged out of UCLA in the early 1970s. Among the school’s First Wave are Charles Burnett (Killer of Sheep, 1977) and Haile Gerima (Bush Mama, 1976), filmmakers who employed the neo-realism of Third World Cinema as a model. McCullough belongs to the LA School’s Second Wave (Julie Dash, Alile Sharon Larkin), characterized by more personal, feminist, and experimental modes of filmmaking. Melding the avant-garde strategies of Maya Deren, Stan Brakhage, and Shirley Clarke (McCullough’s friend and mentor), with the non-Western politics of African filmmakers like Ousmane Sembene, McCullough’s films have examined everything from dance, to child birth, to African American history. Currently, she is completing a documentary on the Los Angeles Jazz legend, Horace Tapscott.

Shopping Bag Spirits and Freeway Fetishes: Reflections on Ritual Space will be screened on a continual basis from 11:00am – 6:00pm.