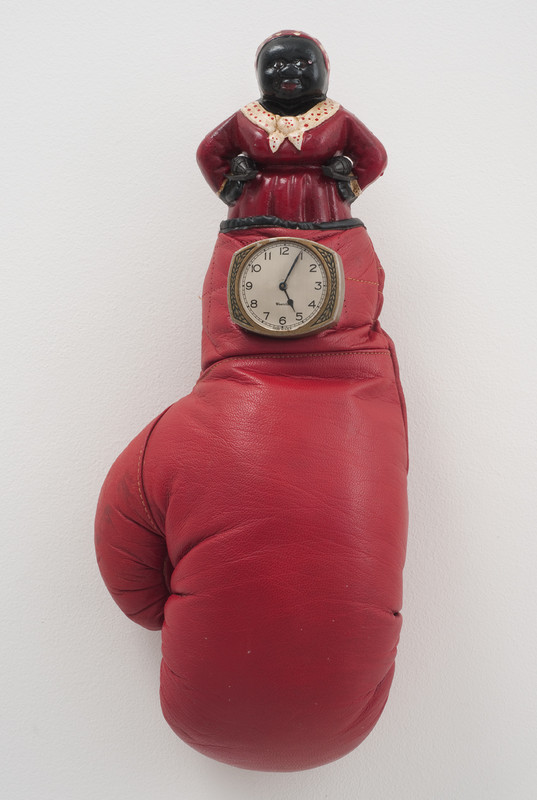 Roberts & Tilton is pleased to announce, Red Time, a site-specific retrospective installation by pioneering Los Angeles artist, Betye Saar (b. 1926, Los Angeles). An amalgamation of found, created, borrowed and recycled objects, the installation will examine Saar’s past, present and future. Red Time is set to divide Saar’s practice into three categories: “In the Beginning,” “Migration and Transformation” and “Beyond Memory.”

“In the Beginning” includes works from 1960-1970, exhibiting Saar’s interest in metaphysics, the occult and magic. These works incorporate Euro-centric concepts of palmistry, phrenology and astrology in addition to Afro-centric concepts of voodoo and shamanism. Works from this period take form in print, drawing, as well as Assemblage windows, boxes and alters. During this time, while mother to three, Saar became a respected member of Los Angeles art community with peers that include David Hammons, John Outterbridge, Ed Kienholz and George Herms. Many of the works Saar created during 1960-1970 begin to bridge the unknown and the uncomfortable, with allusions to such artists as Romare Bearden, Jacob Lawrence and Joseph Cornell.

Spanning from 1970-2010, “Migration and Transformation” focuses on works of strong social and political content. Subjects such as the Diaspora, slavery, racism, revolution and feminism are explored in varying mixed media Assemblages—boxes, washboards, trays and cages—each paradigmatic of Saar’s comprehensive body of work. Saar’s use of borderline hazardous, racially charged imagery has resulted in an extraordinarily significant body of work created in the United States’ Post-Civil Rights era. In his 2011 publication, How Racism Takes Place, George Lipsitz writes:

“Saar also recognized... that struggles against racism could be undermined by uncritical absorption of sexist hierarchies, that Black women’s experiences gave them especially important things to say about race and space. Saar responded by changing the scale of space, by burrowing in, constructing works of art from material items, images and ideas grounded in everyday life, emphasizing connections between the physical places of the city and the discursive and political spaces that shaped Black consciousness and culture... ”

Works from “Migration and Transformation” are combative— these works are Saar’s own forceful yet thoughtful counter attack on racism in America—past and present. The Liberation of Aunt Jemima (1972) is the exemplary, if not best known, manifestation of Saar’s enlistment and transposition of “hazardous” imagery. And while similar content and visual imagery continue to be present in her most recent work, Saar persists in pushing boundaries. “Beyond Memory,” a selection of recent work from 2010-2011, highlights Saar’s quest for a new creative expression through the reinterpretation of language, objects and materials.

Saar has been recipient of two National Endowment for the Arts Fellowships (1974, 1984), a J. Paul Getty Fund for the Visual Arts Fellowship (1990), and a Flintridge Foundation Visual Artists Award (1998). In 1994, she and artist John Outterbridge represented the United States at the 22nd São Paulo Biennial in Brazil.


Roberts & Tilton is a Participating Gallery of Pacific Standard Time. This unprecedented collaboration, initiated by the Getty, brings together more than sixty cultural institutions from across Southern California for six months beginning October 2011 to tell the story of the birth of the L.A. art scene. For further details, please visit pacificstandardtime.org