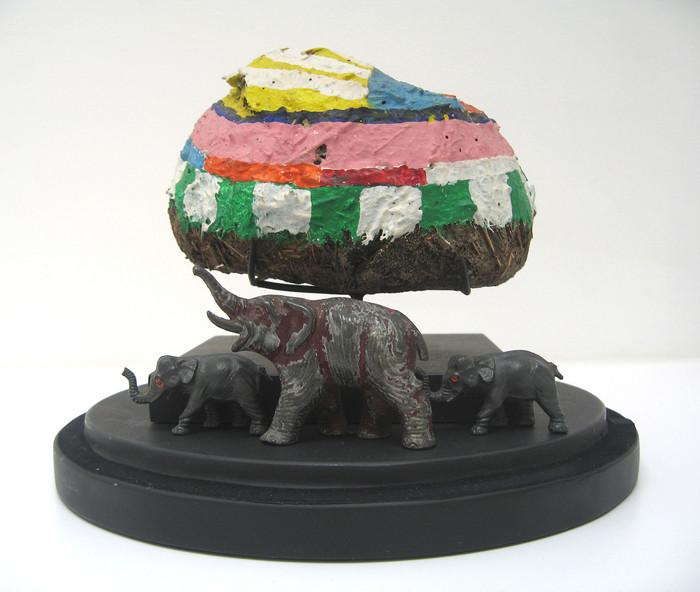 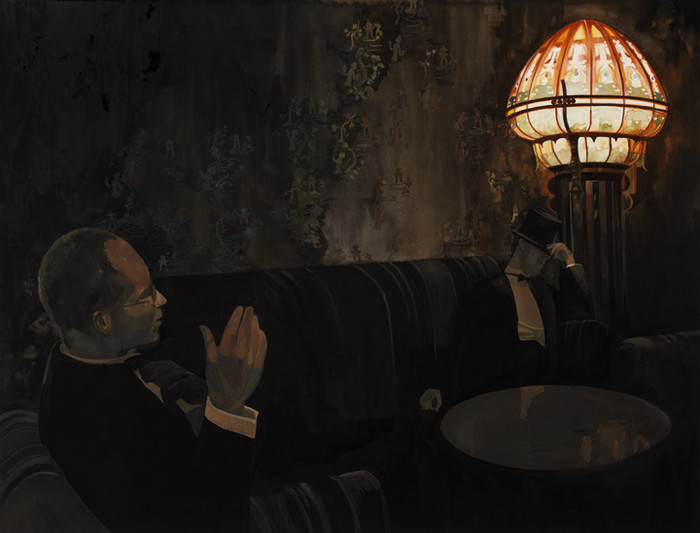 Opening reception for the artists: Saturday, November 21st, 6 to 8pm

Ana Mendieta’s 1975 film, Alma Silueta en Fuego (Situeta de Cenizas), documents Mendieta’s burning silhouette, impressed into the earth. Remarking on the existing natural landscape and provoked ephemeral fire, Mendieta addresses larger notions of feminism and the act of performance. In the spirit of Mendieta, Melanie Schiff’s photographs of young women portray the subject mimicking her surroundings. Schiff’s subjects adapt to her respective surroundings, becoming a piece of the environment, rather than the focus of it. Collation between space and placement in John Baldessari’s painted photograph combinations address a harsh optical territory. Baldessari encourages the viewer to decipher and interpret challenging visual relationships. Thomas Houseago reconstructs the human form with aberrant vigor, combining variances in volume and proportion with raw, unrefined material. Demetrius Oliver positions the human form against a triumphant environment. With his 2008 work, Penumbra, a large piece of coal is placed atop a photograph of Oliver’s own head, provoking imposing thoughts of mortality and circumstance. As a leader of the 1960’s/70’s Los Angeles Assemblage movement, Noah Purifoy’s tar and feather constructed work, Strange Fruit, inserts an assertive, yet poetic voice to the socio/political component of the exhibition. Collectively, these artists employ earth-derived elements into their respective practices; conversely, each artist presents a distinct provocation to the viewer.


Solo Exhibition by Delphine Courtillot "Raptures of the Deep"

In her second exhibition at the gallery, Delphine Courtillot has created a series of paintings on paper that play with an iconography inspired by the popular codes of “mysterious” representation in cinema history wherein specific visual conventions suggest the inexplicable.

In these paintings, Courtillot references both the Art Nouveau movement or Jugendstil, German for Youth Style, as well as early 20th century Amsterdam architectural heritage. Allusions are evident in Courtillot’s depiction of specific buildings including the Tuschinski movie palace, a landmark of the Amsterdam School (an architectural movement largely influenced by Expressionism that started in the Netherlands around 1910,) the Tiffany Lamp Studio, an inscrutable store possessing the allure of a turn-of-the-century bourgeois apartment stuffed with the celebrated lamps, as well as the famed Dijsselhof room in the Central Museum in The Hague (Dijsselhof, a Dutch designer very close to the Arts & Crafts movement, utilized traditional woodcarving and batik techniques to constitute an almost medieval décor,ultimately creating an enchanted dream world within the literal space of a living room.)

Courtillot capitalizes on what she calls a “very strong phantasmagorical potential,” dramatizing interior spaces by creating a tension between objects, simultaneously illuminating and darkening the corners, reflecting back to the viewer a world seemingly at odds with itself, balanced somewhere between fantasy and imminent catastrophe. The darkness in these paintings appears manufactured and the light that suffuses each work seems to have derived from a far off world; yet the specificity of each of these interiors, the particularity of the shapes and strangely drained out colors, grounds these images in a specific historical moment in time. Courtillot is in essence “reenacting interior space,” assigning it new meaning, amplifying the “artificial sublimated nature of the space” creating an alternate dreamscape.

The paintings included in Raptures of the Deep dramatize literal historical space, creating meaning not through the literal image itself but through association, the juxtaposition of implied space. Ultimately, the meaning does not reside in the picture itself, but is created at the very moment when the viewer associates himself with the representation.

Delphine Courtillot was born in Paris, France in 1972 and currently resides in Amsterdam, The Netherlands. Courtillot has shown at Tilton Gallery in New York and Annet Gelink Gallery in Amsterdam and ASPN, in Leipzig, Germany and her work was included in Ophelia; sehnsucht, melancholie en doodsverlangen, Museum voor Moderne Kunst, Arnhem, The Netherlands, as well as the seminal exhibition Against Nature, curated by Astrid Honold at the Luis Adelantado Gallery in Valencia, Spain, among others.

Delphine Courillot Raptures of the Deep is made possible with the generous financial support of the Mondriaan Foundation, Amsterdam; Consulate General of the Netherlands; and Fonds BKVD.