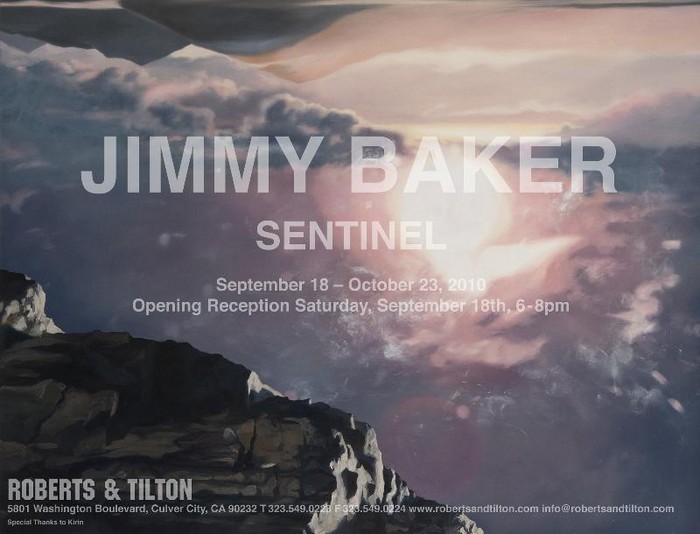 Jimmy Baker’s newest body of work entitled Sentinel, on view at Roberts & Tilton, represents the next installment of paintings and audio that focus on the solvent nature of technology inferred on the landscape. Digitally mined from social media sites, these anonymous amateur photographs are woven together with unusual documents of military testing. The paintings embody a visible tension, a disassociative quality as each image betrays its own quietude with subtle but impossible focal anomalies, to strange supernatural blasts of light, and paranormal novas exploding across the picture-plane. The paintings are very smooth oil renderings with contrasting areas of soft blending and modeled brushwork, replete with glossy surfaces coated in pours of oil mediums. The analog of these handmade images to digitally manipulated ones creates a paradox that is central to Baker’s discussion of a post-digital world. Various audio clips have been captured, manipulated, and created to accompany the paintings as a spectre of fear and uncertainty. The audio is channeled through hypersonic speakers that were derived from military development to beam focused sonic waves like a searchlight.

These paintings refer to specific geographic areas that have housed the history of U.S. military testing and surveillance. The works stand as oblique ciphers to an ever-shifting sense of secrecy, and a continued push into the invisible (often unmanned) world of American power. As a parallel to this, the superficially austere compositions seek to hide the genetically manipulated process behind the work. While genre paintings of the landscape served to exploit the awe of nature, to incite reverence and a sense of economic promise, Sentinel records the residue of technology on our land, that is at once the subject and the viewer of a million lenses.