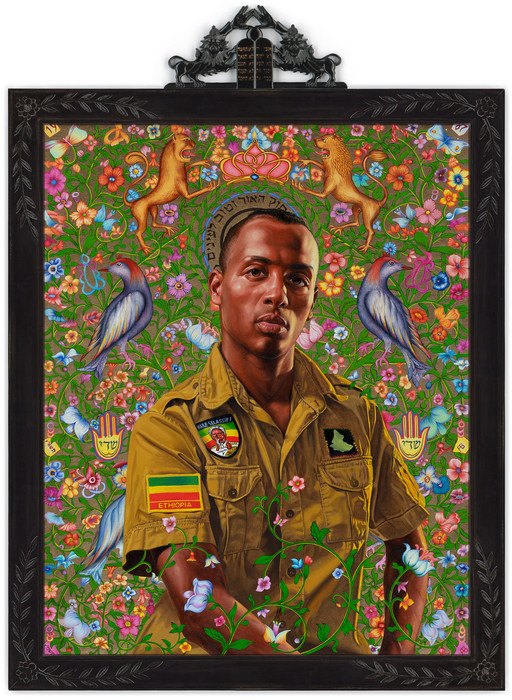 After a while...I started to see certain patterns emerge, patterns such as ways of dressing, patterns of speech, a type of post-black urban sensibility that supersedes race, that supersedes tribal group. It is, in many ways, something to do with class affiliation. The positioning of Israel within The World Stage series is crucial and key in understanding the project given that each country is selected for its unique political and social importance in the world arena in the year 2011. The work included in The World Stage: Israel specifically concentrates on contemporary Israeli youth culture utilizing discotheques, malls, bars, and sporting venues as locations to scout participants. All of the models come from a full range of ethnic and social backgrounds. In addition, the work relies heavily upon a desire to see the decorative traditions that have come out of Israel, historically juxtaposed with some of the more contemporary modes of national and personal expression.

The Old Testament forbids any visual representation of God, and as man is made in the image of God, figurative references are noticeably absent in Jewish histories. Integrating Jewish imagery with both a contemporary and classical Western influence, each model’s pose references art historical paintings created in the manner of the great masters. Intricate patterns and saturated colors appropriated from ancestral papercuts become the unifying foundation from which the Israeli men are elevated to a position of power extending into perpetuity. Throughout history, Jews from the lowest to the highest echelons of society created devotional papercuts, a tradition of Jewish folk art and culture, as a personal expression of faith. These ritual objects found in synagogue wall paintings, tombstones, book illustrations, and calligraphic and printed sheets fulfill religious and mystic needs. The hand carved frames created for The World Stage: Israel combine orthodox imagery of the Hands of Kohen (the blessing hands of a Kohen - a person descended from Aaron, the high priest) and the Lion of Judah (symbolizing power and majesty and often represented in symmetrical, confronting pairs.)

Kehinde Wiley was born in Los Angeles, received a BFA from San Francisco Art Institute in 1999, and a MFA from Yale University in 2001. His paintings are in the collections of over forty museums including the Metropolitan Museum of Art New York, Los Angeles County Museum of Art, Hammer Museum, High Museum, Walker Art Center, and Brooklyn Museum to name a few. Selected exhibitions include The National Portrait Gallery, Brooklyn Museum, and Columbus Museum, among others. Recent collaborations include Puma World Cup, BET, VH1 and USA Network. His work has been the subject of eight monographs to date, with a forthcoming Rizzoli publication scheduled for release in 2012.

Special thanks to The Consulate General of Israel, Los Angeles