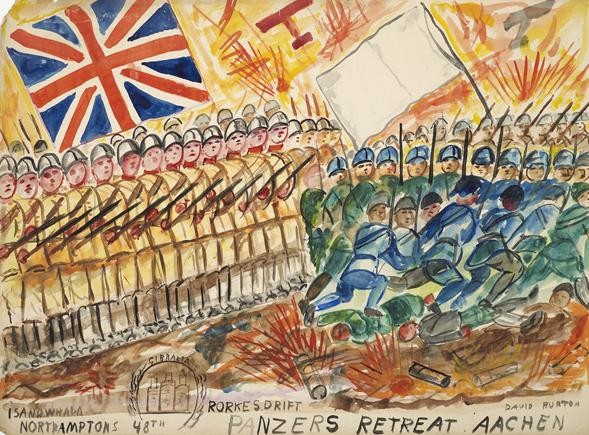 Rob Tufnell presents a series of paintings by David Burton from the early 1940s.
David Burton drew on the stone pavements of Rosslyn Hill, Hampstead from the mid 1920s until his death in 1945. Born blind in one eye, he learnt to draw as a child by copying a series of his father's Mezzotints depicting scenes from the Indian Rebellion of 1857. After serving with the Kings Royal Rifles in the trenches at Loos, Mons and Passchendale during the First World War he worked for the Great Western Railway and in the dockyards at Sheerness. Badly burnt in an explosion whilst employed by London Underground he began working the streets in penury. Lucy Wertheim, the gallerist and collector, returning from a studio visit with Henry Moore, in Parkhill Road, Hampstead came across Burton and became his patron, supplying him with paper, paint and a small stipend.
The paintings presented in this exhibition incorporate national flags of some of the nations involved in the Second World War. Fiercely patriotic Burton's paintings reflect government propaganda of the time and recall Britain's strange alliances with, for example, Stalin's Soviet Union and opposing Chinese armies led by Chiang Kai-shek, Chairman of the National Government of China and Zhu De of the Red Army. Narratives within the paintings are often inaccurate, indicative perhaps of half heard news reports and rumour. The Northamptonshire Regiment, for example, depicted by Burton forcing the retreat of a German Panzer unit in Aachen, did not see service in the European theatre of war. The allied capture of Aachen was instead achieved at great cost by infantry and armoured divisions of the US Army.
In 1938 Burton's first exhibition with Wertheim was reviewed in the Daily Mail, the Evening Standard, the Times, the Sunday Times and the News of the World. Such exposure led to his inclusion in Mass Observation's 'Unprofessional Painters' survey, organised with Julian Trevelyan, which toured Britain in 1938 and 1939. The exhibition also included works by other well known. self taught artists such as coal miners from the Ashington Group', Henry 'Bus Driver' Stockley and Alfred Wallis. In 1939 his work was also included in two group exhibitions at the Wertheim Gallery: 'Pictures by Postmen, Gardeners, Sailors, Housewives etc., etc' and 'Pictures for Children'. In 1945 he held an exhibition at the Charlotte Street Centre organised by the Marxist art historian, F.D.Klingender and was the subject of a British Path6 news film, One Man Show', and a feature in Picture Post magazine: 'the Hampstead Primitive'.
For much of this time Burton was a resident of Arlington House hostel for homeless men in London's Camden Town. Other former occupants include the writers George Orwell (who stayed there whilst he researched 'Down and Out in Paris and London', 1933) Brendan Behan and Patrick Kavanagh. In 1945 Burton was moved to St Joseph's Home in Portobello Road where he was cared for by the Little Sisters of the Poor and then on to Hampstead General Hospital and finally Archway Hospital where he died on the 11 August 1945, two days after the bombing of Nagasaki and four days before the Japanese surrender was announced and the War ended.
www.robtufnell.com