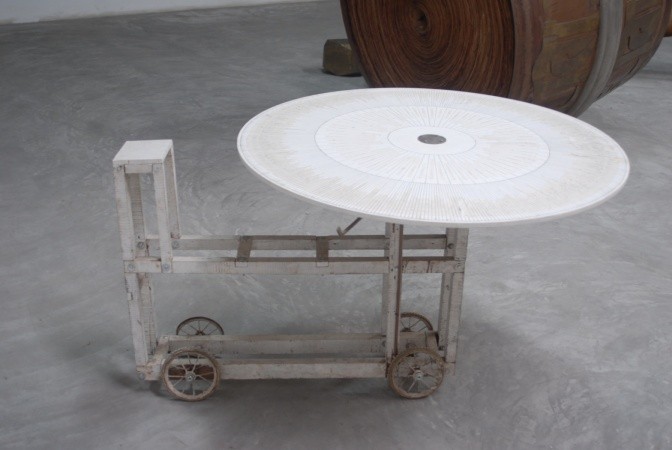 "Advance through retreat" is a stratagem elaborated in the Chinese military treatise The Art of War. Curator Martina Koeppel-Yang chose this as the theme of the exhibition. Attributed to Sun Tzu [Sunzi], a general who lived in the 6th Century BC, The Art of War was not only the most important book on military strategy of its time but continued to influence Eastern and also Western military and business tactics and strategies to the present day. For the curator this stratagem is best expressed by a historic photograph of Yuan Shikai (1859–1916), one of the most powerful generals of the late Qing Dynasty, wearing the traditional coat and hat of a Taoist hermit and sitting in a fishing boat. The image of Yuan in a hermit’s disguise along with his strategic retreat has therefore been the starting point for the concept of this exhibition Yuan here made use of the traditional trope of the loyal official — a lonely literati in a fishing boat. He did so to protest against his dismissal by the Qing court in 1909. The location Yuan had chosen for his retreat could not have been farther away from the usual perception of an appropriate setting for a lonely hermitage. Indeed, Huanshang in Henan Province, where he stayed until 1911, was a busy traffic junction. Together with Yuan’s use of the common trope of the loyal official, the evident ambivalence of his retreat from the center of power was to be read as an invitation for the Qing Court to make use of him again and to eventually invite him to govern as president of the first Chinese Republic. Quietly waiting for an opportune moment, Yuan used the strategy "advance through retreat", as many officials did before him. The image of the loyal literati choosing to be a recluse in times of conflict with the court developed into one of the most resilient tropes in Chinese art and literature and haunts Chinese culture like a kind of spectre.

"Advance through retreat" is a strategy relevant for artistic production in China today. This exhibition aims to look at traditional media from a different angle. It sets out to present artistic positions using traditional media and procedures, such as divination, the game, gambling and traditional strategies—for instance, “advance through retreat”—in order to develop autonomous languages that utter positions of resistance to the assimilating tendency and the power structures generated and maintained by a lingua franca. Advance through Retreat attempts to show, how, in specific historical moments, the use of or the retreat into tradition is employed as an efficient strategy of resistance.

Larys Frogier, the Director of the Rockbund Art Museum notes, "Advance through Retreat brings together Chinese and international artists who distance themselves from considering tradition as frozen time or as an established system. Rather, they question tradition as a way to test the limits and possibilities of contemporary creation, of remembering and remaking histories, and of revisiting certain established codes in order to re-invent today’s challenges of tradition in our urban societies, political contexts and daily lives. Advance through Retreat is thus a project in which tradition is embraced by contemporary artists as on-going living practices—from re-writing different layers of art and social histories to the uses and/or misuses of cultural codes, images and mundane objects. It is thus clear that tradition is not only about a simplistic opposition between past and present; it is about an evolving process of using, transforming, reinterpreting, and developing cultures. Hence in the exhibition Advance through Retreat, tradition is represented, performed and questioned as a whole set of practices, images, and objects based on vernacular, daily activities."
www.rockbundartmuseum.org