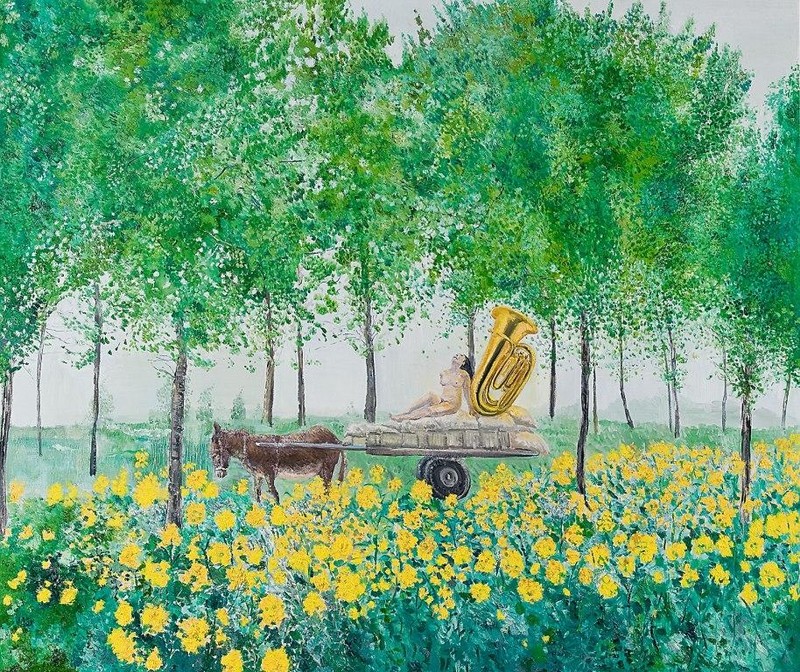 Rockbund Art Museum will present a duo show A Potent Force from Jan. 26th to Mar. 31st, 2013. A Potent Force brings together the work of two strongly individual Chinese artists, Duan Jianyu and Hu Xiaoyuan, both of whom happen to be female. The distinct sensibilities that they each bring to their art are an amalgam of their respective life experiences, of the incidental features of their personal background and the environs in which they grew up, and of the aspirations of their respective generations: Duan Jianyu was born in 1970 and graduated in 1995 from the oil painting department of Guangzhou Academy of Fine Arts; Hu Xiaoyuan was born 1977 and graduatedin 2002 from the design department of the Central Academy of Fine Arts.

If these two artists have anything in common beyond their gender, it is how society views them as women and, as a result, what the art world expects from them. The different ways in which they navigate these issues is evident in their work, and by means of two entirely unrelated approaches to artistic expression. Duan Jianyu is one of the finest painters at work in China today, with a visual vocabulary that appears at first as simple as child’s play and, yet, is a highly sophisticated mechanism for capturing her perceptive observations of the world. Hu Xiaoyuan works with a range of mediums with a particular strength in video, which she deploys as a sensual experience for the viewer, providing the maximum emotive force via a minimum of factual information to draw upon. An encounter with the work of each of these artists engages viewers on a direct and subconscious level and, at the same time, provides a great many ideas to contemplate.

Duan Jianyu’s painting centres on its own universe as created by the artist herself, articulated in a language that parallels a ‘secret emotional code’. This is done using motifs familiar to viewers from any geographical or cultural background, but that combine to form a vernacular that is elegantly “Chinese”, and very much about life in the present tense. Duan Jianyu demonstrates a profound grasp of social realism through personal writings that function as a vast resource of inspiration for her paintings. Social, humanistic affairs unfold in the paintings and are linked by a poetic title given to the various series to which the individual paintings belong. These titles are deceptively romantic; The Mountain and Water Always Echo Our Love, or Going Home. They are also distinctly humorous; How to Travel with a Watermelon, Yes or You Are Welcome. This aura is accentuated in images of animals, particularly chickens, PLA soldiers, air-hostesses, blissful countryside vistas and still-lifes. The narratives that are undercurrents in the paintings interweave places, environments and physical and social character types from composition to composition on a variety of scale and of painterly mannerism. There is always more than meets the eye in Duan Jianyu’s paintings. Whilst every element she presents is recognisably real, the juxtaposition of individual parts is such that in this world of fantasy we become sharply aware that truth can be stranger than fiction. They also affirm the working of a vivid and articulate imagination. As the artist says ‘Imagination is the lubricant of everything’.

As a title, the phrase A Potent Force makes reference to the subtle, lyrical (Duan Jianyu) and introspective (Hu Xiaoyuan), intellectual prowess that characterises these conceptual plays with painting and video works. There is a socio-cultural shift in the generational gap that separates them, which is reflected in the topics they explore as well as the mediums chosen to express these. If a particular concern for Duan Jianyu is the complexity of human society, its bubbling desires, grand ambitions, lofty ideals and the innate weaknesses that are so often its failings, conversely, for Hu Xiaoyuan, art is a means to examine the self, as a purposeful sentient being; as the raison d’être for existence, for if there is no reason then existence becomes a nihilistic, futile void. Hu Xiaoyuan’s formative experiences were more or less devoid of “politics” in the ideological sense, but overrun with the politics of economy and internationalism that governed China’s “peaceful rise” to its present international status. Her generation is, courtesy of the internet as an information platform and the ease of travel, more widely versed in the ways of the international world than her elder peers. She is, as a child of the reform era, precious, precocious, confident and slightly insecure, yet independent in thought and will. Comfortable with her individualism, Hu Xiaoyuan finds reason to challenge the notion of art in China today, as a value system, as a process of visually interpreting the world and as a material object. Recent video installations increasingly undermine the process of reading the works: What we, as viewers, see is not clear in terms of narrative or form. Hu Xiaoyuan asks that we become aware of looking and does so by making it as hard as possible to recognise the work’s content. Her works focuses on what can be done and experienced within the sphere of the self, relying on one’s own sense alone to navigate and understand what is seen and felt of the world.

The art of Duan Jianyu and Hu Xiaoyuan lie at opposite ends of the emotional spectrum. A Potent Force, therefore, is not a show about women artists: whilst in one sense the title alludes to the situation of women artists in the art world today, it points more directly to the succinct meaning and enduring resonance of the art of these two artists, Duan Jianyu and Hu Xiaoyuan.

Duan Jianyu was born in 1970, and works and lives in Guangzhou. The brushwork and color in Duan’s work bizarrely bring us to a blurry and slightly annoying place. Her paintings recall a boundary that is mentally non-tangible in our daily lives. Yet they precisely recall the feeling of living in modern China: dynamic and tacky. Maybe the haunting “tackiness” is the product of our pursuing modernization.

Hu Xiaoyuan’s artistic pursuit of impeccability is exquisite enough to be practically obsessive. In her installations and paintings, the artist reinterprets the connotation of art in a more palpable way . She remains detached from dialectics about meanings and concepts, heading instead towards subtle daily experiences. Hu’s early works, such as Mine (2004),A Keepsake I Cannot Give Away (2005-2006), Those Times (2006, showcased at Kassel Documenta 12), are elaborately made from a variety of materials, including hair, old cloth, Braille, which signify abundant emotions and express personal volition. Since 2008, when she finished her Muted, Summer Solstice, and Wood series, she has consciously kept a distance from her previous style, taking up rational investigation into linguistic forms and repetitive experiments to reexamine the relations between subjects and forms. In 2010, the visual expressions in her video artworks edge toward maturity and ease, representing a more distinct style.

Born in Harbin in 1977, Hu Xiaoyuan graduated from Central Academy of Fine Arts. She was invited to several remarkable exhibits, inclusive of Mahjong - Contemporary Chinese Art from the Sigg Collection in Kunstmuseum, Switzerland; Documenta 12 in Kassel, Germany; The Ungovernables: 2012 New Museum Triennial at the New Museum, N.Y.C., U.S.A. Hu is among the most widely recognised young Chinese artists.

Karen Smith is a British art historian specializing in contemporary art in China since 1979. She has written widely on the subject for numerous journals and exhibition catalogues, and is the author of numerous artist's monographs, including Ma Ke, Shi Jinsong, Jia Aili and others. She has also authored several books on China’s contemporary art scene and its history including As Seen 2011: Notable Artworks by Chinese Artists (Beijing World Publishing Corp., 2012/Commercial Press 2012) and Nine Lives: The Birth of Avant-Garde Art in New China (Scalo, 2006, Timezone 8, 2008). She is currently working on a history of the 1990s titled Bang to Boom: Chinese Art in the 1990s.

Her curatorial work includes numerous group and solo exhibitions for China's contemporary artists in China as well as abroad, including (with Simon Groom) The Real Thing at Tate Liverpool (2007), The Chinese: Photography and Video Art from China at the Kunstmuseum Wolfsburg (2004), Music to My Eyes at Today Art Museum, Beijing (2009), and Subtlety at Platform China (2008), as well as solo exhibitions for Liu Xiaodong, Ai Weiwei and Xu Bing in the US and the UK. In August 2012, she was appointed executive director of OCAT Xi'an, the newest contemporary art centre under the OCAT Shenzhen Museum Group, launched in 2013.She has lived in Beijing since 1992.
www.rockbundartmuseum.org