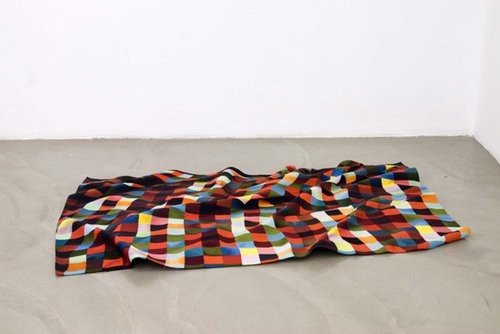 It is believed by some that the mythical ‘flying carpet’ of Central folk tradition stems from the use of Harmel (Perganum Harmala) or Syrian Rue, a psychoactive plant, in the red dye found in ancient weavings. It is thought that Harmel, a woody perennial shrub with small white flowers, ingested through history by different cultures in different ways, not only formed the basis of ‘Turkish Red’ dyes but also inspired the designs in which they were used with its hallucenogenic properties.

Altogether Elsewhere takes this belief as a starting point to explore ‘psychedelia’ in contemporary art practice. Avoiding clichés of psychedelia that simply adopt bright colours and refer to synthetic, laboratory produced hallucenogens, the exhibition instead attempts to frame apparently opposing conceptual, craft or media-led practices and design within a timeless art history that goes back to the shamanic, drug induced rituals of prehistory.

This is the second incarnation of this evolving exhibition. The first was held at the Zoo Art Fair in London in October, 2009.

The exhibition is curated by and presented in association with Rob Tufnell.
www.rodeo-gallery.com