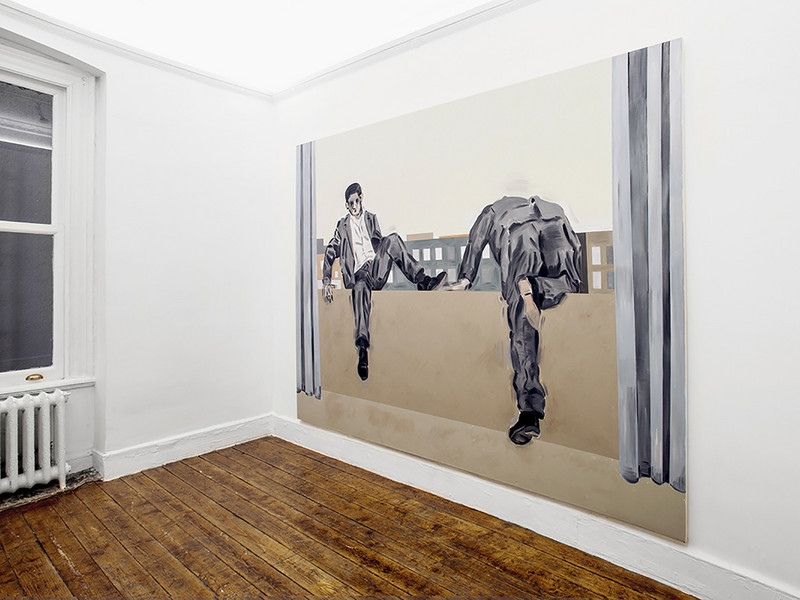 The first solo exhibition of Apostolos Georgiou at Rodeo brings together a new body of works from 2013 and 2014.

They seem absurd and clownish though slowly the cloud of absurdity disappears and the acts become familiar feelings and situations. He chooses to paint things left unspoken in life; abrupt outbursts from the inside take shape in the body of his heroes, men and women. Georgiou’s heroism is one of defeats and contemplation, rather than a glorification of machismo. Apostolos Georgiou was born in 1952 in Salonika and grew up there. His heroes depart from there and are still stuck in this moment of time and the looks. Their passions and obsessions are not of the 50s or of today; they belong to the Modern man and woman, the one that tries to escape the anxieties of living, our destiny whose source is loneliness, pain and abandonment. Their atmosphere reminds us of films made by the Italian Neorealists; bodies in architecture, loan souls in quest of themselves.

The work is everything but grim; it has a lightness and deep humoristic atmosphere. The cartoony personas always find solutions in their acrobatic poses of convenience. The world we live in is a balance -or an unbalance- of the natural to the manmade. The Earth and the globes, the chair to sit on and the one to show (to who and for what?), hanging on from the window... Apartments of a certain middle class that throw parties and feel eccentric enough to put the chairs on the table; to give pleasure some space. But is the music classic or ephemeral? Is this entertainment honest or does it come with social expectations? Georgiou’s amazement for this world is curiously playful and has the confidence all boyish makings have. But it is also fatalistic and feels natural.

The unfinished is a condition in life and in painting – a state of mind. There is no real resolution in the problems Georgiou poses. Perfection exists only in nature. And nature is important for an artist who learned to color correct his paintings in the outdoors, leaning them on olive trees on the island where he spent much of his life, viewing them from a distance of ten meters, running to save them when the wind blew stronger. The artist becoming his own hero; the paintings (un)conscious self-portraits. They derive from the comic tradition, the hero from the working class, whose funny demeanor does not bother him, one who plays unaware that we are all watching; his frictions with the higher classes and his always winning one way or another. Real comedy contains the tragic and should be distinguished from satire. Georgiou’s works have no happy endings. One may even say they have no ending at all as the one work cancels the other as well as activates it. The selection for the show at Rodeo contains very few women and this decision is conscious. This exhibition is about masculinity at large that is also the feminine. In a similar way to ancient theatre from many parts of the world, it was the men that acted all roles. So this exhibition is not about a particular sex, as these men are men and women alike. They are all of us.

On the opening day there will be an informal conversation between Apostolos Georgiou and Leyla Gediz, on painting, representation and heroes.
www.rodeo-gallery.com