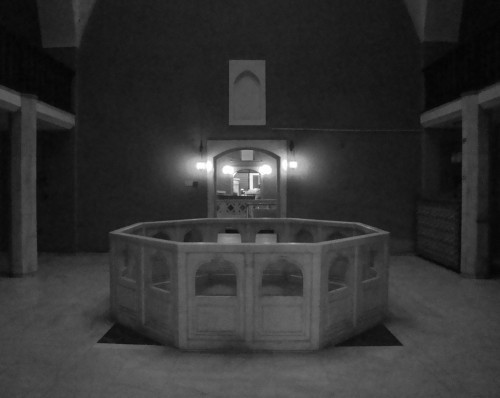 Rodeo is very pleased to show the latest short video by Gülsün Karamustafa, Anti-Hamam Confessions.
Black and white photos taken by the artist herself of the old and neglected hamam built by Mimar Sinan that still stands today in Tahtakale, unfold within a flow that follows the artist’s personal thoughts on hamams. Being brought up in a milieu that was against any practise that derived from the Ottoman days, an old and bygone past, Karamustafa goes through all these memories that were passed from the elders onto her and that formed a hatred towards ‘these places.’ As it still happens today, in the days when the artist was growing up, there was a fear towards anything that would challenge the identity of the modern Turk so all these urban legends were formed around hamams too. We go through her thoughts while we travel through the interiors of the abandoned hamam that is nowadays turned into a shopping mall and a storage space for local businessmen. The dripping sound of water reminds us more the dripping sound of the Chinese torture than that of running waters of a hamam, since there is no more water, no real function to it but just a remnant of what it used to be: a social centre for gatherings as well as a bath.
The hamams that she’s only been fond of are the ones depicted in Orientalist paintings, the ones that could never had existed.
Gülsün Karamustafa (b.1946, Istanbul) has had various solo exhibitions in institutions as Kunsthalle Fridericianum, Kassel (2006), Musee d’art Moderne de la Ville de Paris (2005), Museum Villa Stuck (2006) and has participated in group shows in Philadelphia Museum of Art (2010), Martin Gropius Bau (2009), Walker Art Centre (2004), Moderna Museet, Platform Garanti (2003) and Istanbul Modern. Has been part of Istanbul Biennial, Singapore Biennial, Biennials in Sevilla and Gwangju.
www.rodeo-gallery.com