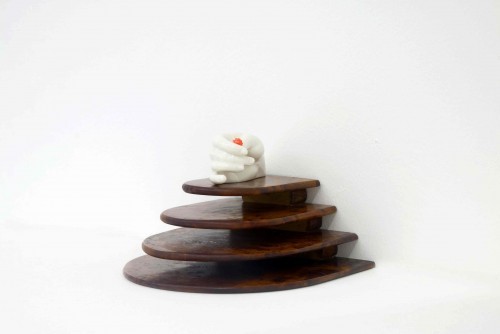 In this exhibition, the third of Gülsün Karamustafa’s at Rodeo, she brings back to life an historical work first exhibited in ‘A Cross Section of Turkish Avantgarde / No:5 ‘ at Hareket Kiosk, Dolmabahçe Saray in the summer of 1988. Along with it there are new works, that she composed by playing with old postcards, porcelain objects, found things she’s revived.
A central piece is the image of a talisman print from the Encyclopedia of Istanbul by Reşat Ekram Koçu. An imprisoned bully, stricken by love for a fellow inmate, has a portrait made of his desire. The portrait is drawn in full mustache between the feet of the bully, floating in Ottoman writing, hearts and other symbols the writing telling the love story.
Ottoman is also the writing in the postcards she has collaged, juxtaposing her own writing for the first time as a second layer. Language is important and the postcards reveal the disconnection of a nation over a hundred years: Karamustafa while assuming the content of the original writing and expecting it to reflect the image on the card it turned out being mostly irrelevant but also unexpected as it usually is. By juxtaposing the professional translation on and around the card these objects come back to life in an eerie and disconnected manner, as relics of another time that we can only relate to as such.
Similarly, the young porcelain 'boy with the plane' that she found in Istanbul, reflects an aesthetic style of a fascistic era. The boy is put in a cage and the sculptural aspect of it turns it again to distanced material. What one does with appropriation is a demystification from the original ‘function’ or source of it. And transplanting objects, images or films in different times is a talismanic act. We are hanging from the past in the same way; we create temples and archives by similar drives. As Malcolm McLaren said 'nostalgia is the smell of dead cells, so is hair'. Cutting hair is a ritual. Hair is so charged and has been a symbol for so many artists that becomes a cliche; like most symbols of witchcraft are. Women in the 30s show off their short hair while the table with the scissors and the wigs awaits like a forgotten ritual of a bygone sect.
The Monument to Kitsch (1988[2013) stands in silence, a revamped installation in peace with the present. The pink and blue dresses are luminating the space, while use of materials like Plexiglass, plastic flowers and fluorescent light tubes manifest the artist’s relatively early interest to appropriation.
Gülsün Karamustafa (b.1946, Ankara) lives and works in Istanbul. Her practice varies from painting to film making and has created significant landmarks throughout her life that reflect the social issues Turkish society has confronted throughout the decades
political uprisings, women’s prisons, migration and cultural differences. Recent solo exhibitions include ‘The Apartment”, National Museum of Contemporary Art, Athens (2012),”Etiquette”, IFA, Stuttgart/Berlin (2011), “The Monument and the Child”, Academy of Fine Arts, Vienna (2010), “Memory of a Square”, Villa Stuck, Munich (2006) and selected group exhibitions: “Dream and Reality”, Istanbul Modern (2011), “Starter”, Arter (2010), “Strange and Close”, Van Abbe Museum, (2009). Karamustafa has participated in the international biennials: 3rd Singapore Biennale “Open House” (2011) as well as ARSENALE 2012: The First Kiev International Biennale.
www.rodeo-gallery.com