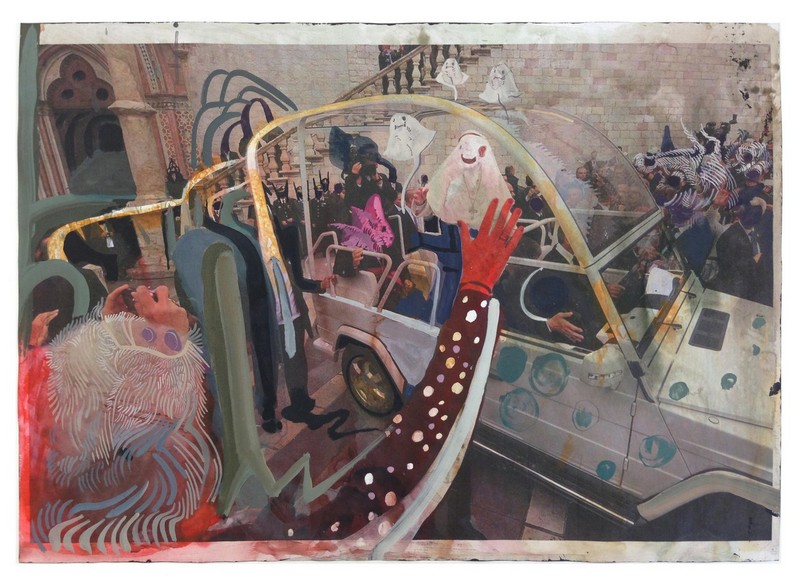 In an effort to deconstruct patriarchy and structures based on hegemonic practices, Rodeo brings together a group exhibition that will take place in two spaces; the gallery on Sıraselviler Caddesı no 49 and the space of Near East magazine and projects in Dolaptere.

THE FALL is never ending and this exhibition could be material that constantly changes as the current historical moment requires. The artists’ list could be endless and its (sexual) identity more mixed but at this first stage no woman is part of it. Not that the feminine doesn’t come hand in hand with hegemony or that women are innocent. From Cleopatra to Maggie Thatcher, from Empress Theodora to Angela Merkel; and on and on. But this exhibition is not about that. John DeLorean, national symbols, Archbishop Makarios, a cable conduit, a series of family photos and Abdulah Ocalan, become the begining of a story that is a proposal without an end of how we can deal with the world we inherited and the one we keep pushing. It is (not) one way of seeing things. But how to continue from here? And how to deal with what’s been already achieved? And what is left to do?

MAKE IT NEW JOHN (2009) by Duncan Campbell portrays the failure of engineering genius John DeLorean. The son of a Romanian immigrant, after quitting from General Motors convinced the British Labour Government to fund his new project; a factory in Belfast that manufactures a new sports car. Despite the success of the attractive model with thousands of sales, the company could not generate profits and the factory shut under Thatcher in 1982, and the glamorous DeLorean was arrested by the FBI.

Lukas Duwenhögger’s UFO STAR (2014), a sculpture made for the artist’s solo show in London with Rodeo, is an assemblage. Commandante Che invites us in the comforting climatized hall, placed on a box of an UFO heater, surrounded by shinny bits of reds, blues and blacks. A sweet gesture from an alienated leader at a neoliberal time.

The sculptures of Ramin Haerizadeh, Rokni Haerizadeh and Hesam Rahmanian are the perfect damaged heroes. The practice of the three artists as a group, as any collaborative act, is by default an ego-less, anti-hierarchical gesture. While having independent practices the three artists, who live and work in the same house and make work together, respond to politics and war with a sense of joy and hallucination. Accidents become part of the work and spontaneity and humour is crucial to the sculptures. The material for the works on paper come from personal family photos as well as newspaper clippings the artists collect.

I LAND (2010) is the last piece of a trilogy that is the result of a series of research carried out by Christodoulos Panayiotou in various archives in Cyprus. Found in the Press and Information Office in Nicosia, these photographs follow and document the public life of the leader of the country between 1960 and 1977. While recording the public life of Archbishop Makarios, the photographer in his free time was shooting scenes of leisure, beauty and daily life writing a parallel history to the official one he was hired to do.

INTERMEDIATE PREVENTIVE (2014) is a work by Cameron Rowland that has a mirrored self work that will be exhibited at Rodeo, London as part of the exhibition The Chicken and the Egg, A Chicken (opening June 6 2015). While the work in Istanbul is available for sale the work in London is a rental. Common in Rowland’s practice is to engage the buyer of his work in a dialogue about ownership, rights and responsibility over the work one gets. Conduits cover electrical cables that run on buildings’ facades which mainly power security lights or surveillance cameras. Intermediate Preventive consists of conduit, cable, and a high-pressure sodium wall pack. The light fixture is not shown and will never be in the custody of the collector, but will remain in the possession of the artist.

A starting point for this exhibition has been John Smith’s FLAG MOUNTAIN (Southern Nicosia, looking towards the border with the Turkish Republic of Northern Cyprus) (2010). Life in Nicosia goes on while an ‘invisible’ dramaturgy takes place every day, as the carved flag on the mountain Exadaktylos appears with the daylight and disappears while appearing stronger with the lit elements at night. Smith’s sense of humour and strong visual language compose a perfect deconstructed monument, be it a National Anthem and a Flag.

Vangelis Vlahos’ IS THERE ANY OVERSIGHT ON OCALAN? (2009-2011) consists of 119 images recreating Kurdish leader Abdulah Öcalan’s known and rumored route before his capture outside the Greek ambassador’s residence in Nairobi on February 15, 1999 and his transfer to Turkey. The work arranged formally on a 23 meter long wall-mounted shelf is consisted of landscape, cityscape, aerial and architecture images of Moscow, Rome, Athens, Minsk and Nairobi, where Öcalan hid or tried unsuccessfully to find political asylum after he left Damascus, Syria on October 1998. The photographs are presented in a row and the order follows Öcalan’s journey. For the localization of these pictures and the exact conditions (weather etc) existing during the period Öcalan was there, Vlahos used testimonies and articles related to the case, given that the photographic coverage of the route is very limited to non existent. Most of the images included were found in touristic guides and magazines of the late 1990’s and on the Internet.

Ramin Haerizadeh (b. 1975, Tehran) lives and works in Dubai. He has exhibited in Charles Saatchi’s Unveiled: New Art from the Middle East, London (2009); Sharjah Biennial 10 (2011); The Trees Set Forth to Seek for a King at the Museum on the Seam, Jerusalem (2014). He has had three solo exhibitions at Gallery Isabelle van den Eynde and a solo at Gallery Nathalie Obadia, Paris (2012). His works are held in a number of significant collections including Guggenheim Abu Dhabi, the British Museum, the Devi Art Foundation and the Rubell Family Collection. Haerizadeh has staged two collaborative exhibitions with Rokni Haerizadeh and Hesam Rahmanian at Gallery Isabelle van den Eynde, Dubai (2012, 2014) and one at Kunsthalle Zürich (2015). In 2014, the three artists participated as a collective in the Robert Rauschenberg Foundation’s residency in Captiva, Florida.

Rokni Haerizadeh (b. 1978, Tehran) lives and works in Dubai. He has exhibited in Carnegie International (2013); Here And Elsewhere, New Museum, New York (2014); Sharjah Biennial (2011). His works are held in public and private collections, including the Carnegie Museum of Art, the British Museum, Tate Modern, the Devi Art Foundation, the JP Morgan Chase Art Collection and the Rubell Family Collection. Haerizadeh has staged two collaborative exhibitions with Ramin Haerizadeh and Hesam Rahmanian at Gallery Isabelle van den Eynde, Dubai (2012, 2014) and one at Kunsthalle Zürich (2015). In 2014, the three artists participated as a collective in the Robert Rauschenberg Foundation’s residency in Captiva, Florida.

Hesam Rahmanian (b. 1980, Knoxville) lives and works in Dubai. He has had solo exhibitions at Gallery Isabelle van den Eynde (2013), Paradise Row, London (2011) and Traffic, Dubai (2010). He participated in a group show at the Royal College of Art, London, as one of eight finalists for the MOP CAP 2011 prize. Rahmanian has staged two collaborative exhibitions with Ramin and Rokni Haerizadeh at Gallery Isabelle van den Eynde, Dubai (2012, 2014) and one at Kunsthalle Zürich (2015). In 2014, the three artists participated as a collective in the Robert Rauschenberg Foundation’s residency in Captiva, Florida.

Rodeo would like to thank all the artists for their enthusiasm and their works as well as ESSEX STREET gallery, Tanya Leighton gallery, Isabelle van der Heyde gallery for all their help. This exhibition would not had been possible without the great generosity of Mihda Koray and Lara Ögel of Near East Magazine and space, as well as Eidotech, Berlin, Andry Panayiotou and Andreas Louzis from Move Art, Athens.
www.rodeo-gallery.com