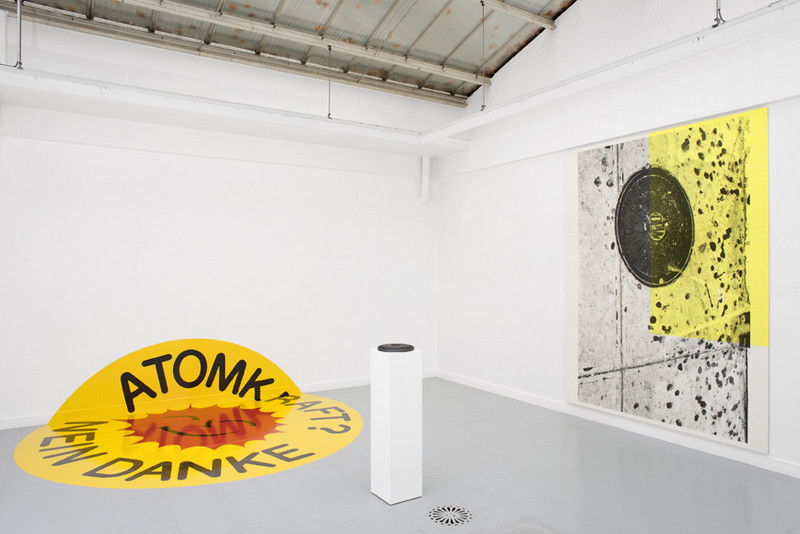 Adam McEwen has gained international recognition with the creation of a wide variety of works that draw their inspiration equally from popular imagery, historical events and the quotidian features of the city – specifically New York City. From WWII to the present, McEwen draws a personal link between his vision of capitalist development and its continual reinvention. Through his work, he looks at historical narratives from his own perspective and, in doing so, hopes to unsettle the viewer’s perception of media coverage and tools of mass communication.

For his third exhibition at the gallery, Adam McEwen will show a series of works made using cellulose sponge. The sheets of sponge are printed with photographic images taken by the artist of the sidewalks of New York City. The images highlight dirt, spilt liquids, unidentified detritus and the blackened wads of chewing gum that are ubiquitous in downtown Manhattan. Turned 90 degrees, these banal images become radically de-familiarized; placed on the unexpected surface of the sponge (which is seen daily in any kitchen), they become doubly strange, both eminently comprehensible and momentarily confusing.

The sponge works also represent a development and extension of the artist’s Bomber Harris series, a group of paintings that employed dirt-blackened chewing gum stuck on canvas and that were named after the British Air Force leader who oversaw the destruction of German cities during World War 2. Noting his own inheritance as a British school child of the 1970’s, McEwen made the gum paintings as a way of deconstructing that identity. The paintings, staging a collision between elegant abstraction and filth-encrusted saliva, draw a line of connective tissue between the casual, daily desecrations of the city and the handed-down lessons of the past.

The gum on the paintings was placed in patterns determined by the artist’s photographs of the New York sidewalks. These new works on sponge recycle these same photographs, and propose the city – as with paintings – as an endlessly mutating record of marking, back-trackings and misunderstandings.