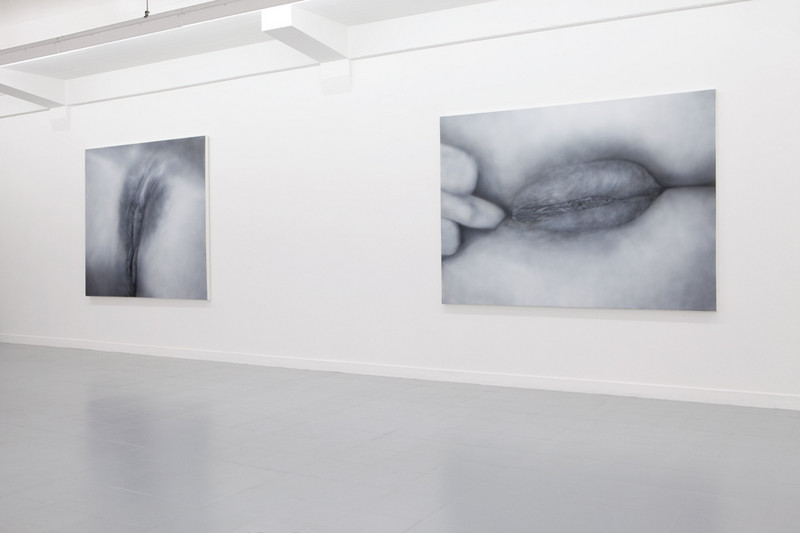 Galerie Rodolphe Janssen is pleased to announce her first exhibition of Betty Tompkins in Brussels from February 17th to March 17th 2012.

Her intent from the start was to have two disparate elements in order that "the abstract and the sexual content - coexist equally in the work." Or as she says : " I realized that if I cut off all the identifiers - heads, hands, feet, etc. - I could create these beautiful abstract images out of the part of the photograph that was most compelling which, of course, was the explicit sex part. »

After some group shows in the early 1970’s, her work has almost been left untouched by the critics and dealers possibly due to the subject matter.

For censorship reasons, her works were even held in the French customs in 1973.

In 2003, Tompkins has been included in the Biennale de Lyon which captured extraordinary attention to her work. After that the Centre Georges Pompidou even acquired Fuck Painting #1 (one of the two paintings that had been censored in 1973) for his permanent collection.

Since then Betty Tompkins has been painting Fuck, Cunt or Kiss Paintings as in the late 1960’s. She has been studying different mediums and went from airbrush to stamps, graphite powder or fingerprints.

Betty Tompkins imposes a distance with her explicit subjects, or as she says : « I see something intimate made monumental - we see a visual we don't usually see in a medium we don't expect. »