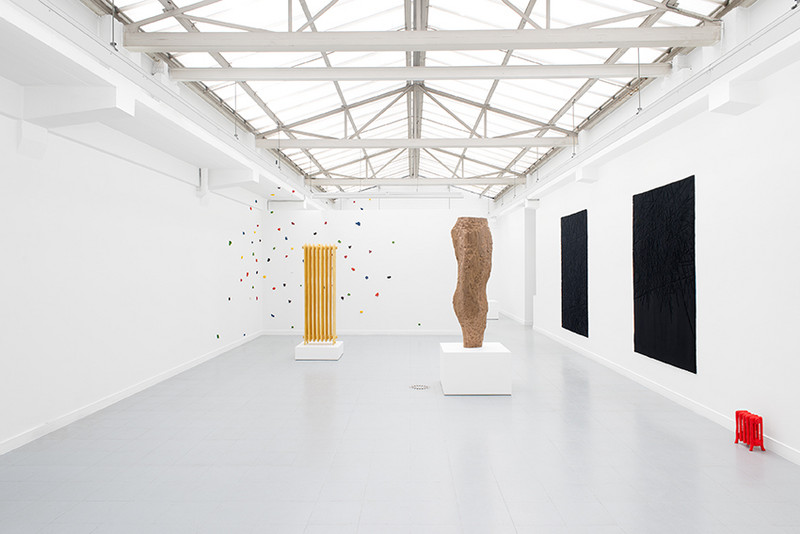 Galerie Rodolphe Janssen is pleased to announce a solo exhibition by David Adamo (b. 1979, USA).

David Adamo is very much a sculptor, one with an acute awareness of the materials he uses, and the experiences that have led him to them. He is also a father, one who must negotiate the unfamiliar territory of home life as he is confronted by his own childhood memories.

For his first solo exhibition at Galerie Rodolphe Janssen, Adamo unfolds an emergent domestic scene through an unlikely cast of sculptural characters. Radiators, climbing holds and carved carpets interact, giving playful hints as to their narrative through the material experimentation and paradoxical juxtapositions that build them.

A lingering sense of personal experience ties Adamo’s sculptures - and the materials they’ve been re-formed in - together. It is, for example, from his grandfather, who made a living from engraving names and images into them during the 1950’s, that his interest in carving carpets developed. Re-cast radiators, meanwhile, drum up images of Adamo’s earlier days in New York; these objects are often all that’s left when a room has been emptied of its personal touches on move-out day.

Like the fading memories that inform Adamo’s formal choices, the scale and purpose of his works are often distorted. Utterly commonplace, cast-iron radiators come in a variety of sizes, but here their proportions are exaggerated, as if made to fit the perspective of a small child. Adamo’s radiators are either scaled down to tiny objects, which remind one of children’s toys. Or he blows them up, enlongates their shape, makes them uncannily large.

Central to David Adamo’s practice is his relationship to form and function. His radiators are carved and cast in impossible materials - beeswax and balsa wood - so as to remove their function by virtue of their material. The mass-produced nature of cast-iron radiators is further subverted by the meticulousness of Adamo’s process; balsa wood is carefully cut and stacked together to reproduce the radiator’s familiar form. The treatment of his carved carpets similarly subverts the original intention of the craft; rather than demarcate their surface with delicate decorative patterns and words, the lines Adamo carves are gestural, recalling a tactile relationship to the body more than to interior design. The climbing holds, spread out onto the gallery walls, are made out of fondant, a sugary mass used to decorate cupcakes. Adamo’s choice of material takes away the original purpose of the grips, which was to support climbers.