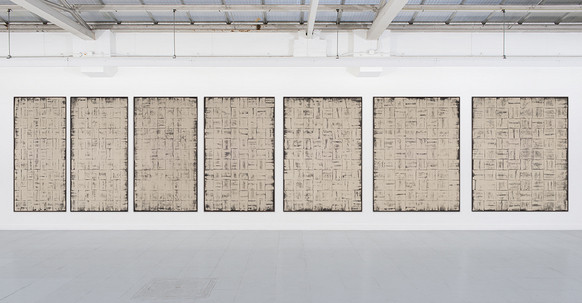 Galerie Rodolphe Janssen is proud to announce the first exhibition of 2014 featuring the first solo of French artist Davide Balula titled Ember Harbor. The unique conceptual strength of the artist’s practice will be demonstrated in a two-part exhibition of new work that builds upon ideas that the artist has been exploring throughout his career. The collection of new work explores concepts concerning spatial relationships and awareness, as well as less tangible phenomena such as temperature and body movement. In addition, like much of his previous work, the pieces featured in the exhibition have been developed with a concern and interest not only in the materiality of the work but also in the effects created through the interaction between the audience and the art work itself.

In the first space, Balula presents a new edition of his “burnt paintings.” This series consists of two elements: the initial burnt wood piece, consisting of a solid plane of selected burnt rectangular wood fragments and the imprint of the burnt wood onto canvas. The effect of these two elements is a mirrored image that demonstrates a positive and negative relationship much like that of photography or printmaking. Hung as a series, with the originals and imprint placed opposite each other, this installation creates a captivating symmetrical field that redefines the audience’s understanding of space and architecture. As the viewer walks through the space, the mirrored pieces begin to narrow in gradual but perceptible increments. Similarly, the checkered pattern of the wood fragments in each canvas diminishes. This systematic reduction is an intentional gesture by the artist: he invites the audience to become aware of the physicality of the space and, in turn, alludes to the precariousness of our own individual spatial perception.

In the second space of the gallery, the artist explores means of challenging the audience’s perception of space in a different way. Presented in dialogue with the burnt paintings, which are constructed with the help of elements of heat and pressure, this newly designed work alters the physical atmosphere in a less visible way by creating variations of temperature. As the viewer enters, the temperature will rise and fall based on both the body heat of the viewer as well as other heat mechanisms that will be installed. A recording device will be set up to record the temperature changes throughout the run of the show. The resulting work consists of both the structural record-keeping elements devised for the piece as well as the final temperature readings.

Together, the two spaces in the show demonstrate a tunnel-like understanding of temperature and combustion, much like the structure of a lit cigarette. Balula’s burnt painting series represent the cigarette body and the fluctuating temperature represent the embers of the cigarette tip, which burn brighter and stronger during each inhalation.