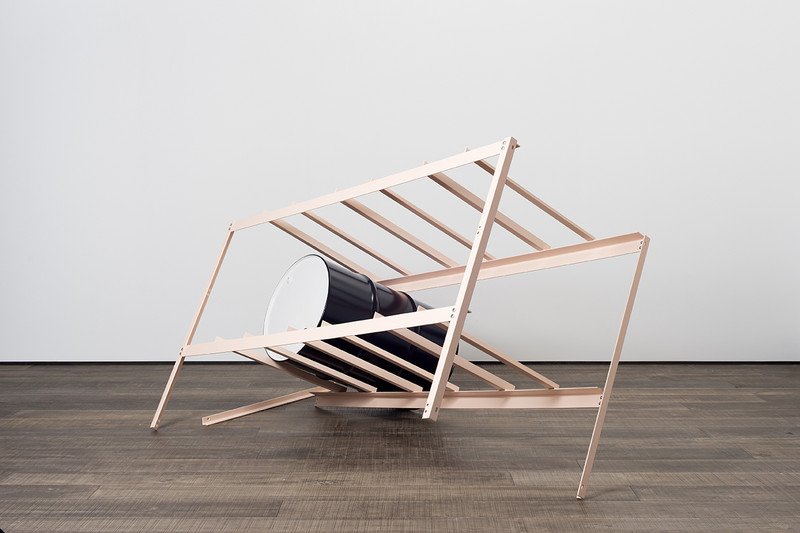 Galerie Rodolphe Janssen is honoured to present the work of young American artist Dylan Lynch in an exhibition titled Oops. Following the success of the exhibition (BRU)S: The Still House Group at the gallery in 2013, which included pieces by Lynch, this exhibition is the artist’s first solo show at the gallery.

The playful title of the show demonstrates the artist’s interest in investigating the role that chance and mishap play in his work. In each piece, Lynch invites the viewer to enter his world and to imagine the actions that have led to the final work. For example, in the piece Forced Collaboration, a baseball is found lying on the floor of the gallery surrounded by shaddered glass. Looking towards the window the viewer finds that the gallery window has been broken. The action (throwing a ball through a window) is the only controlled element of the piece. The final aesthetic result, the evidence that is left behind from this action, is left up to the unpredictable forces of nature. As the viewer uncovers the evidence, he too becomes part of the story, as a witness or even an accomplice as the title suggests.

In this exhibition, presented in the gallery’s newly opened second space, a collection of Lynch’s uniquely constructed sculptural work comes to life. To create each piece, the artist first carefully chooses his materials, which are often commonly found industrial materials or other utilitarian objects. He then explores the unpredictable reactions and effects that natural force can have on this material as a way of challenging the limits of matter and being. After exploring and applying different possibilities of manipulation, the final result is a singular construction forged with the assistance of force and chance. Together, Lynch’s diverse sculptural works demonstrate elements of balance, pressure, tension and deconstruction.

About the artist
Lynch received his BA from the Eugene Lang, the liberal arts college of The New School in 2011. He has worked on a number of projects and group exhibitions as part of the Still House Group and as a solo artist. His work was included in Mixed Media Message (2013) at Barbara Gladstone and the Still House exhibition Straight II DVD programmed alongside the NADA art fair in Miami in December 2013. Lynch has also been working on +1, a Still House Group project commissioned by Art in General featuring an artist-run storefront space in New York that presents rotating exhibitions.