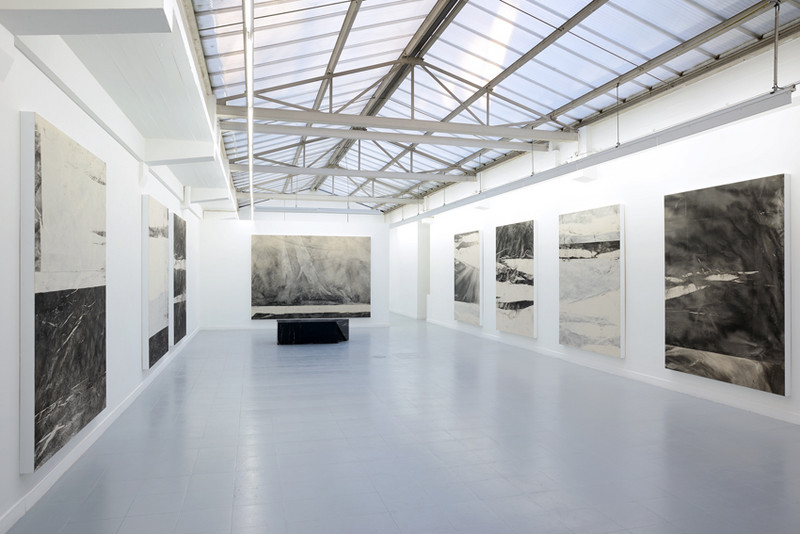 Sam Moyer uses simple tools—textiles, ink, and, previously, bleach—to make work that is anything but simple. And even within the self-imposed constraints of a rectangular picture plane and a monochromatic palette, she’s continuing to push the vocabulary of painting in new directions. The aesthetics of photography have always been an important reference point for Moyer, as well as the readymade divisions of landscape: sky, horizon line, land or sea. But her latest paintings from 2012 have me thinking of flags, and elephant hides; of mangled punk Xeroxes, sun-baked highways, the elegantly crinkled surfaces of disposable plastic bags, crumpled bedsheets, the face of the moon. (These are all compliments.) Moyer stitched together many of these new works from various pieces; dark blocks of gnarled, nuanced black are paired with segments in which the bleach has all but faded away any remaining pigment. In Moses Moment we get a swooning wash of grey, Moyer at her most photographically inclined (it looks like we could step inside this one, follow its trail into the distance.) Elsewhere the effect is less romantic, more graphic, the paintings chopped into several distinct chunks, like an abstract digital file that’s been garbled to delicious effect. In this way she gives us the rigidity of the grid while letting the composition run wild within those parameters, a sort of ghostly, monochromatic cousin to Richard Diebenkorn’s “Ocean Park” series. And Moyer’s process—its reliance on an element of chance, and the use and occasional misuse of basic materials—also puts her in line with a new guard committed to moving forward the possibilities of abstraction. It’s a thrilling vision: a topography of folds, creases, slashes, and scratches, so much texture and nuance in black and white.

Sam Moyer (b.1983) lives and works in Brooklyn. She received a BFA from the Corcoran College of Art and Design and a MFA from Yale School of Art. Sam Moyer has exhibited her work in “Between Spaces” at PS1 Contemporary Art Center, Queens in 2010. She has also exhibited at the Contemporary Art Museum St. Louis, Cleopatra’s, Brooklyn, and Max Hans Daniel, Berlin, among other venues. And Rachel Ufner, NY , Société, Berlin.

The specific beauty of the dandy consists particularly in that cold exterior resulting from the unshakable determination to remain unmoved; one is reminded of a latent fire, whose existence is merely suspected, and which, if it wanted to, but it does not, could burst forth in all its brightness.
The Painter of Modern Life, Charles Baudelaire

A long-forgotten neon lamp that was switched on during the Great Depression and left burning for about 77 years has been discovered hidden behind a dusty partition at Clifton’s Cafeteria.
Los Angeles Times, May 26th, 2012

Elaine Cameron-Weir (b. 1985) is an artist currently living in New York. She received a BFA from the Alberta College of Art and Design, Alberta, Canada and an MFA from New York University, New York. Among other places, she has exhibited in Philadelphia, New York, Cologne and Paris. Her work has been reviewed in publications including Art Papers, The Brooklyn Rail, BOMB magazine and The New York Times and was recently acquired by the Philadelphia Museum of Art.
www.galerierodolphejanssen.com