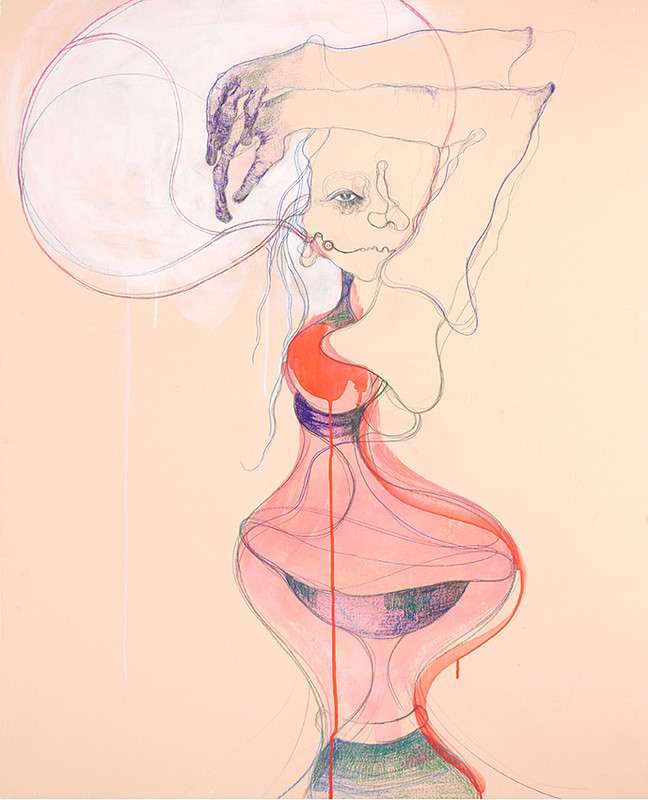 Drawing sits at the heart of Gert & Uwe Tobias’ development of their formal language, and of their subsequent explorations in painting and large-scale woodcuts. Their process alchemically combines a highly personalised mythology with a continuous appetite for popular culture and an expansive knowledge of art and folk history. The Tobias’ works emerge as animistic depictions of unclear yet disarming narratives - ones that we as an audience recognize, but cannot immediately place.

While drawn from the Tobias’ uncanny imagination, the gestural, dancer-like poses of their subjects hint at the brothers’ deep appreciation for art history. Even as the female figures seem to decay and drip, their gracefully outstretched arms and serene facial expressions recall renaissance portraiture. And yet, as smoke-like lines billow in, out, and around the female figures, an air of macabre is unmistakable. The subjects’ ethereal gestures are curiously condensed in their hands and eyes, which succumb to penetrating detail and betray their inevitable deterioration.

The Tobias’ subjects emerge from vase-like forms as part of a continuous metamorphic process, one that tellingly never discloses whether the female form is emerging from the feminine object - or the feminine object is emerging from the female form. Some subjects are accompanied by a cast of creatures - a cat in one drawing, and skeletal or bird-like forms in others. These companions do not stand alone, but intertwine with the female subjects’ physiognomies, as if a winding narrative is self-contained within, or emerges from their bodies. Characteristic of the Tobias’ oeuvre, these narratives appear ambiguous, perhaps even dream-like, awaiting the audience to fill in the details through their own narrative faculty.

About the artists :
Gert & Uwe Tobias (born 1973 in Brasov, Romania) are twin brothers who have collaborated since 2001. Alongside solo exhibitions this year at Maureen Paley (London, UK) and at the Museum Dhondt-Dhaenens (Deurle, Belgium), they have recently presented solo exhibitions at Whitechapel Gallery in London (UK); Kunstmuseum Ravensburg (Ravensburg, Germany); and Team Gallery (New York, USA). The Tobias’ currently live and work in Cologne, Germany.
www.galerierodolphejanssen.com