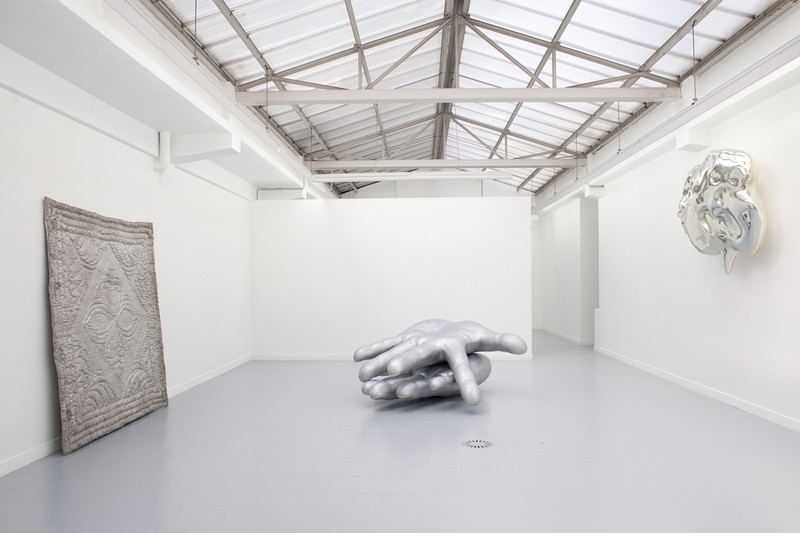 Installation view
JÜRGEN DRESCHER
What do you get?
7 September - 27 October 2012

The artist asks the viewer: “What do you get?” What can I convey through my works? How much of that comes through to you? There is no unambiguous answer to these questions, because usually no surveys are carried out, and it is surely also always a question of viewers’ readiness and mood, of their taste, and of their previous experience—all of which shape their reactions.

In his first solo exhibition in Brussels, the Berlin sculptor Jürgen Drescher (b. 1955) has created a distinctive mise-en-scène of a selection of three-dimensional objects; some of these have been executed in two different forms and are presented in a juxtaposition of sorts. In his work, the artist constantly interrogates the socio-political potential of art and encourages debate on received perspectives regarding the status quo of objects, world politics, and globalization. Here, as in earlier exhibitions, we find casts and molds of everyday objects familiar to all of us. They awaken very diverse associations and sometimes inspire shame, insecurity or curiosity; they also confront us with our own expectant attitude, with our (lack of) knowledge, or with our prejudices. After a process of selection, Drescher appropriates these objects by means of sculptural techniques. He develops a personal approach to them and abstracts them into the sphere of art by translating them into materials such as aluminum, treated synthetic resins, or silver—and sometimes by also altering their scale.

Standing here in the entrance to the exhibition space of the Galerie Rodolphe Janssen, we immediately see the “bodies” of two three-dimensional speech bubbles without text, hovering in front of the walls to our right and left. The white bubble seems directly to blur into the wall; the silver bubble causes our mirror image to splinter as we approach it. It is futile to search for directly communicated information here. Tough luck! The same is true of the empty cardboard box, cast in aluminum and placed in the gallery. You get nothing, it’s only the shell.

On the wall, two more large objects follow, which once again “mirror” each other. It is only after a second glance that these circular—seemingly almost entirely abstract—forms might lead us to think of the drains that water passes through in the context of their everyday use. We constantly see and use such drains: However, the wastewater is far from our thoughts (out of sight, out of mind—we know all about that). Drescher has clearly defamiliarized these massively enlarged bathroom fixtures cum solar symbols from their abject connotations. Thus, the matte, silver-gray “XXL drain”—made of aluminum and still bearing the traces of the poured metal of its production process—literally seems to emit sunrays. In contrast, the other drain was “dipped” in the colors red and blue. An evocative “vacation picture” is thus created out of an object that is actually banal—perhaps a sunset by the sea? How nice, we might think: But isn’t the entire sea itself one continuous problem area?

The casts of decorative quilted blankets or coverlets, leaning on the wall further back, have their origins in different cultures. Educated viewers will recognize this on the basis of their different designs. The more or less floral decor points to the islamic world, the more abstract cross to Europe. All the same, people sleep in both cultures, and quilts and blankets make us think of repose. But, is this repose not entirely subjective and an absolute luxury good, anyway—while the world “out there” keeps turning ...?

And then: two gigantic hands that could be the remnants of a colossal statue. Their symbolism points us in the direction of hands-on, handiwork, working class heroes—perhaps communism. However, they are just lying around: not connected to a body, waiting for their reanimation.

Finally, in the rear area of the exhibition, we become witnesses to a mysterious scenario. A life-sized reproduction of a frozen tuna fish has been installed on the floor. A situation similar to that of a market—and are we not, in the gallery, at a market of sorts? The fish is an icy white, only the incisions made to test its quality are red, almost like in real life. And, once again, we find ourselves thinking of the sea. The tuna fish, which, for several years now—all around the world and without a second thought—we have been eating in the form of sushi, is now in severe danger of extinction and is thus a commodity in high demand.
Here the dead tuna is surrounded by aluminum casts of framed paintings. “High culture”, we might think: But the silvery, glimmering cast pictures’ motifs—at best schematically identifiable and, in part, stained by the sooty smoke of their production process—point to the unearthly, to the psychedelic, to nothingness. Intoxication makes us forget (how practical!), but that is not going to wake the tuna back up ...

Taking his own indecision as the theme of his art, Drescher involves us in a search for solutions; while doing so, however, he remains within the frame of art business. His objects are thus always “commodities” with a core of truth. Viewers and potential buyers can decide whether to interpret them as an expression of political activism or as a form of “l’art pour l’art” buttressed by existential questions. Whereby—a dead tuna makes this more difficult than an empty cardboard box.