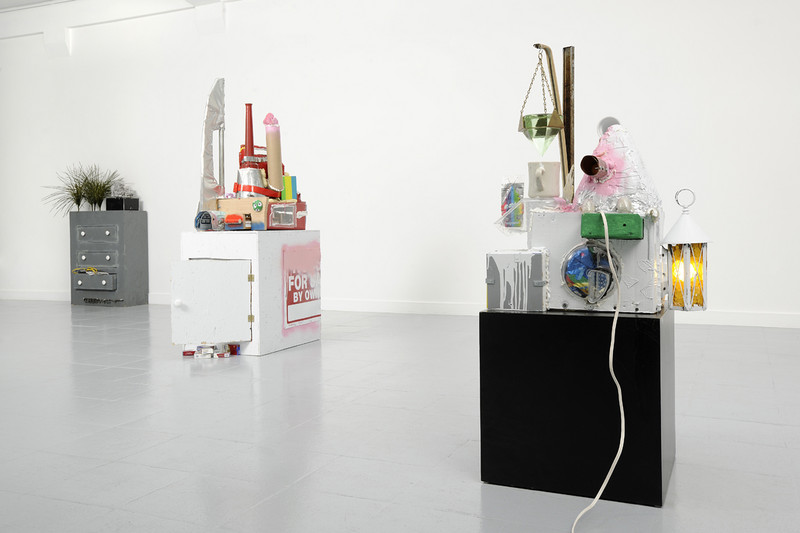 A Few Notes on A Sentimental Journey, in medeas res, and the set of all sets that are not sets of themselves.

I began producing these small architectural models after the housing crisis, an event in which I am intimately involved. In 2008 I abandoned my house in upstate NY. The bank hasn't yet foreclosed on it, although I stopped paying the mortgage almost a year ago. They have sent me a lot of mail, most of which I haven't opened. Now I have an apartment in Greenpoint that I use as both a home and a studio. The models are a response to these events. They are modern architecture, closer to Frank Lloyd Wright or Bauhaus architecture than the house I lived in, although the detail report for the house listed its style as "country contemporary". I was thinking of Martin Kippenberger's architectures made from shipping palettes. Someone told me they reminded them of Thomas Schütte's little buildings. I was also thinking of socialist buildings from the DDR, and referring to those in hopes of impressing my German girlfriend. She doesn't even like the DDR though, I am the one with the "Ostalgie". She likes Kippenberger though, and she is a good socialist.I was also making pieces I called "Floor Plans" and "Property Lines" out of the same types of material as the sculptures. They are shaped metal pieces that hang on the wall, like Knoebel. Originally I was going to pair them up with the sculptures, but I decided I wanted a greater disparity of material between the sculptures and paintings. So I kept them separate and decided they would just be metal shapes. Or maybe they will remain property lines.

I call the large collages "Super-Supplementals" because they are almost completely made out of supplemental material, ie; notes pertaining to other works, drawings and photographs regarding other works, posters for events that are over, receipts for art materials, notes from ex-girlfriends, parking tickets, a special t-shirt, letters of repremand from my landlord and the administration of the university where I teach, drawings from assignments I gave my students, packaging, etc. etc. It is a bit like a T.S. Elliot poem.
interlude : signaturesBruce Conner disdained signing his works, in stark contrast to Warhol. He saw the signature of the artist as a brand and refused to take part in such a commodification. Warhol for his part, reveled in it. Mostly, I have agreed with Connor on this point and there are many of my works floating around unburdened by my name. But then I started to reconsider. What is in a name?
Is it, as Connor would have it, a sign of branding, of a superficial commodification of meaning? Or, is it instead, its "impossible" re-subjectivization? It is precisely because I suspect it is the former that I can stake my wager on the latter!For some of the architectures I have created a special signature made from stainless steel. I have also given special attention to the signatures on several of the collages.

Carlin describes a house as a "pile of stuff with a cover on it". So then I decided to make the little architecture into compressed versions of the collages, by filling them with the same kind of materials I had used in the collages. I put all my old sketchbooks in there, artworks by myself and others, and many other special things that I had been saving for years. Some people were surprised to see me incorporating some of these things into my artworks, and I told them they were being fetishists. Actually, I am not so tough. Going through all these old memories made me very emotional. I am a very sentimental person. My apartment is pretty empty now, although I have a seemingly infinite supply of "stuff", much of which is packed away in a storage space upstate. Sometimes I had to change the stuff to make it fit into the sculptures, cutting it into pieces, or compressing it in other ways. There was something digestive about that process, which reminded me of Dieter Roth.
interlude : absent mannequins, absent paintingsIn the desert, (could this be Malevich's desert?) in the american west in the 50's nuclear experiments were conducted on artificial neighborhoods populated by mannequins. An atomic bomb would be exploded nearby, and the the damage on the houses and the mannequins they contained would be gauged. I had thought to include some mannequins in this show as well, in order to stand in for a certain ideal viewer among my ideal artworks. I had also considered including some big messy paintings that would disrupt, in a direct and intrusive way, any sort of tidy narrative schematic that I had created by positing these "ideals". I still like that idea. Maybe next time.

It is worth mentioning in regards to the many bureaucratic and financial documents contained in the works, a favorite scene of mine from Michael Haneke's film adaptation of Kafka's novel "Das Schloß". In the scene K., the land surveyor arrives with his two assistants (who only ever seem to cause him trouble) at the house of the mayor/superintendent who is holding a letter assuring K's employment. But the mayor seems unable to locate the letter. He grants permission to the assistants to look through his files but refuses this permission to K, saying "It is not that I don't trust you, but letting you look through my files would be a bit too much." The files are stored in a giant armoire and the assistants immediately pour them out all over the floor. They kick the mountains of documents around for a while, creating a huge mess of papers while K. looks on in frustration. They are sliding around in the papers like children in a pile of leaves. Finally, they tip the armoire onto its back and begin haphazardly shoveling the mountain of documents back inside. Since they "could not find" the document, K. in grudgingly bequeathed a job as the school janitor by the mayor. This scene made me laugh so hard I couldn't sleep that night. I felt as though I were both K. and his assistants at once, searching for the document that will assign me my proper role, while at the same time throwing these documents all over the room! This gives rise to the sad fact that I am the mayor as well, refusing to grant myself access to the document I need.
Here, in A Sentimental Journey, you are treated to an intimate view of my papers both public and private. Perhaps in rifling through my drawers, you will be charmed by the drawing of a squid I made when I was eight years old. My father was pretty attached to it.