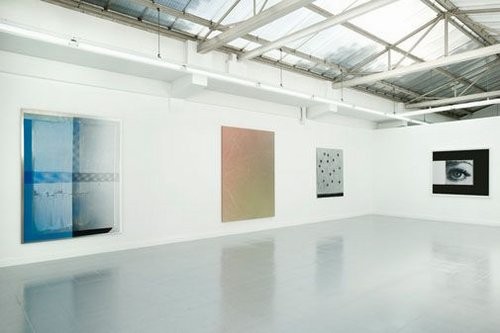 How far we've come, or think we've come, since these words were spoken in 1923, long before computers, special effects, and digital imaging, as well as strategies of appropriation and all those fabricated objects that haunt their counterparts in the everyday. From trompe l'oeil to photo realism, from the reveries of surrealism to the scanning bed, not much has changed. Art is always a reflection of what we call reality, albeit one that passes through different filters that are particular to their times. In ours, this reflection attempts not so much to "fool the eye" as to foreground the very act of looking, both on the part of the artist and the viewer. A mirror, whether a painted mirror of Roy Lichtenstein or a Rorschach mirror of Kelley Walker, should catch us in the act. While the act of looking takes place or is prompted in the studio or in the gallery, it is meant to extend out into the world beyond, and return us to the thing itself.

A number of thoughts arise ...

Does the movie end because we've left the theater? Or is it from there that we begin to see cinematically? When Godard famously proclaimed that "the cinema is truth at 24 frames per second" he wasn't endorsing the veracity of the medium, but reminding us of its insistent deception. Laurie Parsons, who worked with unaltered found objects and in day-to-day situations in the late 1980s, once proposed: "Isn't deception also real?" Although the procession of images that spills onto the movie screen is ultimately, as Hiroshi Sugimoto has shown us in many of his pictures, an accumulation of light, this is only visible as a still image. Does the photograph de-limit the world by framing it over and over again? Or as we begin to look beyond the frame don't we re-encounter things seen all around us in the everyday? Once one has pored over the photographs in Karl Blossfeldt's Art Forms in Nature, for example, those forms reveal themselves in the natural as well as the built environment. The most fantastical landscape painted by Charles Burchfield can be seen to lay claim to an almost documentary take on the strangeness that a walk through the woods will occasion on any given day. Art, even in — or precisely because of — its artifice, compels us to reconcile our experience of the worlds we inhabit, the world of art being one among many.

Within the set of circumstances we call art, there are returns at regular intervals that seem nearly as predictable as the tide. But the fact that the art of our time allows us to look back and to understand that which came before is only a fairly recent phenomenon. Why is it, for example, that the year 1969 looms large for so many curators, particularly those not yet born at the end of the '60s? Aside from its romanticized ethos — filled with mind-expanding drugs, notions of so-called revolution, and its accompanying soundtrack (not forgetting that Iggy Pop referred to 1969 as "another year for me and you/another year with nuthin' to do") — the period resonates in part because of certain works that appeared in and around 1989. Twenty years after artists had engaged with process, materials, performance, conceptual approaches, and embraced art as its own legitimate subject, we were once again witness to less traditional ways of working, as well as ways of seeing, to attitudes and sensibilities that had much in common with those previously encountered. (This historical marker, it should be noted, cannot realistically be set further back. It would be ludicrous, for example, to consider art from 1969 in relation to art from 1949.) And so it was in recent years that were able to view much of what was being made, at least the art that seems worthy of our attention, as reflecting the more adventurous work of the late '80s, which itself mirrored the advanced art of the late '60s.

Every list being incomplete, and with the understanding that some figures appear before or re-appear well after the fact, some simply go on working, while others disappear altogether ...

"Le Faux Miroir" brings together eight artists whose works engage art and perception in ways that can be related back in time, and yet theirs are very much products of our own time, imbued with thought and emotion particular to each of them. Despite the remove with which these works may seem to reflect the world, they come from the circumstances of the artists own lives. (Objects in the mirror are always closer than they appear.) These artists may neither be conscious of nor particularly concerned with a "return" to a sensibility that reminds us of what has come before; this view of our current period, with the advantage of hindsight, is ours from the outside looking in, not necessarily theirs. What these artists have in common is that they are simply making the works they want to see at any given moment. While we may not fully grasp the art that's being made today, or for that matter in any period while we are going through it, maybe we will twenty years down the line. And that should be soon enough.