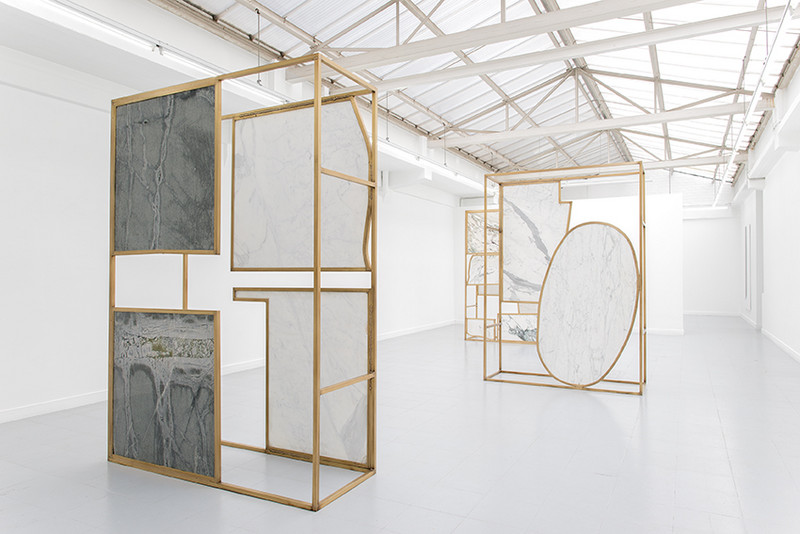 Galerie Rodolphe Janssen is proud to announce the debut of a new series of sculptures and paintings by artist Sam Moyer that address the dimensional, architectural, and environmental characteristics of the gal-lery as site. Installed in the center of the room are three large sculptures set in a row on axis with the gal-lery’s signature double-pitched skylights. Scheduled to coincide with the year’s longest days as the sea-sons transition from spring to summer, “Slowly” meditates on the appearance and disappearance of light.

If there is one unifying interest across a diverse body of work with an expanding vocabulary of material form, it is Moyer’s investment in the effects of light and its impact on the integration and disintegration of space. In previous bodies of work light as an artificial phenomena was explored, notably through the inter-action of a concealed lighting grid hung above the suspended canvases of Moyer’s standout titular sculp-ture More Weight. Following these presentations, her work is now oft-cited in comparison to that of Richard Serra. However, Moyer’s commitment to the illusion of depth and the spatial experiences of light in space align her work more notably to the perceptual works of Robert Irwin or to the pictorial austerity found in paintings by Agnes Martin.

As in previous exhibitions of Moyer’s work, viewers encounter pictorial fields that move in and out of visual consciousness. However, this time Moyer’s wall sculptures have departed from the wall itself and begun to occupy the space surrounding the viewer. Framed and held in place by bronze rectilinear forms, Moyer’s planar expanses of solid marble surfaces—leftover fragments that recall their more functional, sibling coun-tertop forms—are belied when the sunlight from above passes through their semi-opaque surface. The effect is one Moyer recalls seeing inside the Gordon Bunshaft-designed Beinecke Rare Book & Manuscript Library when in graduate school at Yale.

n Moyer’s work, one studied medium will inspire an approach to the next. In the past an interest in photog-raphy has led to experiments in dying and bleaching fabric to make paintings. Consistent is how Moyer directs her chosen materials toward pictorial illusionism. Having recently arrived at painting, Moyer now explores the weightlessness of sculpture. Despite their size and heft, the marble incised in Moyer’s paint-ings seem to evaporate into the flat fields on the surfaces of her wall works. The stretched canvas absorbs light while the rock reflects it—a sly clue signaling material distinction. Moyer’s titles recall the domestic environments their complimentary forms might now inhabit, however we cannot be sure. Like the ambiguity the titles suggest, these works invite both scrutiny and distant views, hovering in some indeterminate liminal optic zone between image and form. Moyer’s exhibition title “Slowly” is taken from a song by Genesis Breyer P-Orridge and Bryan Dall, “She’s Learning Slowly.” In live performances, P-Orridge croons the word “slowly” to the point of exhaustion, at the juncture where the message loses its signifier and trans-forms into pure image experience, quite like it does in Moyer’s resonant surfaces.