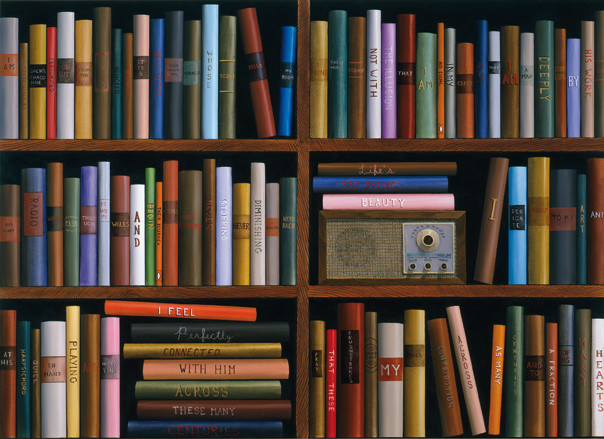 Galerie Rodolphe Janssen is pleased to present an exhibition of new paintings by New York-based artist Sean Landers (b. 1962, USA). This is the first exhibition of Landers’s work at the gallery.

Throughout his twenty-six year career, Landers has used diverse styles and media as vehicles for revealing the process of artistic creation. He is known for using personal experience as public subject matter in order to present a portrait of the artist’s own consciousness. Often considered to be self-portraiture, his oeuvre presents an up-close view into the artist, while commenting on the universality of human thought, creation and existence. This exhibition weaves together themes, imagery and techniques that have been integral to Landers’s practice throughout his career.

Since the early 1990’s, Landers has been using writing as a visual medium to draw the viewer in. Performative by nature, the writing in the early works gave voice to the artist’s innermost thoughts, yet the audience could never be sure where fact and reality left off into fiction, as both were intertwined. In the new series presented here, Landers again utilizes writing not only as a formal aspect of painting, but also as a means to convey deep personal meaning. Abandoning his earlier technique of an immediate, stream-of-consciousness narrative in real time, the writing here is pre-determined, restrained and more elegantly philosophical. The physical form of the texts themselves is now more controlled and they are painted on the spines of books on bookshelves. With each painting, Landers reveals a deeply personal tenet to which he has remained true throughout his artistic practice. Regardless of their singular vision, the paintings collectively describe Sean Landers, the artist, and also each viewer in their own quest to make a meaningful existence during their short time on this planet. Each work is an ode to mortality and underscores the intent and the significance of the art-making individual, and humanity as a whole, as time moves on.

In Radio and Venerable Seafarer, Landers lays out his desire for a meaningful existence, for people to be moved by his work long into the future so that it may live on forever, much like a radio wave’s endless journey across the universe. This desire for eternal life through art left behind is a byproduct of all artistic practices, and part of the universal psyche of humanity. In Pencils, Landers shares a secret memory of his first creative inclination to write, clearly describing the passion he felt at his new discovery, a passion that has not diminished to this day. In Lord of the Seas Landers uses the metaphor of a blue water sailor to describe the purest form of artistic thought; elusive and hard to hold, but once in hand, leading on to another—a never-ending process.

These new paintings are self-referential in more ways than just concerning the text. Some paintings highlight a particular image specifically borrowed from Landers’s studio, and essential to his practice, such as his radio or pencil holder. Some paintings, specifically Monos, Venerable Seafarer and Lord of the Seas, depict an earlier body of work, and can be seen as a self-portrait embodying a self-portrait. Yet all of these paintings bring together two opposing forces in Landers’s work—the desire for revealing himself and the need for preserving his privacy. As a backlash to his initial revelatory writing in the early 1990’s, in 1994 Landers began to investigate the use color as a means of preserving his privacy. He made a number of colorful stripe paintings, the lines of color meant to embody the unwritten, and therefore unread, thoughts. In these new works, the colors of the books purposefully mimic the colors of the stripes in those earlier paintings, while the books themselves reference the stripes.

Survey exhibitions of Landers’s work have been presented at the Contemporary Art Museum, St Louis (2010) and Kunsthalle Zurich (2004). His work has been seen in exhibitions at the Museum of Modern Art/PS1; Whitney Museum of American Art; Massachusetts Museum of Contemporary Art, North Adams; Contemporary Arts Museum Houston; Serpentine Gallery, London; Saatchi Gallery, London; Kunsthalle Vienna; Kunstverein in Hamburg; Musée d’Art Contemporain de Bordeaux and the Venice Biennale, the Athens Biennale and the Berlin Biennial. His early work from 1990−1995 is the focus of a recently released monograph published by JRP|Ringier, and a comprehensive catalogue of his work was published in conjunction with his solo exhibition at Zurich Kunsthalle.
www.galerierodolphejanssen.com