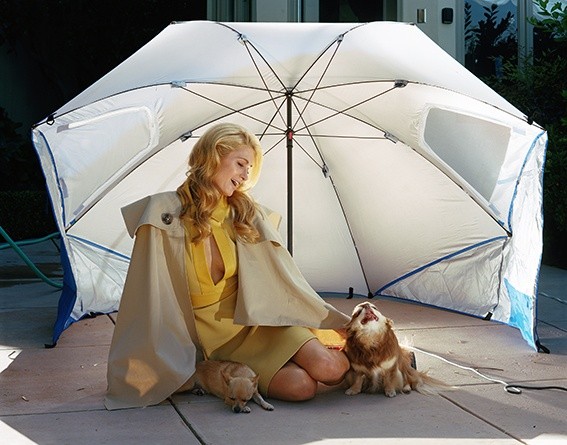 Halos of milky light and long contemplative shadows envelop Torbjørn Rødland’s subjects. The mood feels saturated with emotion, a parley of inner and outer worlds. Like being in the womb— calm, warm, and protected—Rødland’s models nevertheless emote a certain inquietude: anticipation coupled with an anxiety of events that lie in waiting. And yet, it is the tactility of Rødland’s photographic method that looms in his immersive, often elusive narratives.

In one work, strawberries emerge from a bath of cream. A photograph ripe with sensuality, sure, but also a photographer’s photograph—one that nods to Rødland’s analogue process in which form materializes from liquid. In other works, the acuity of formal details seem to betray the drama they build into a scene: A white stretch limousine attempting a Hollywood Hills hairpin turn in The Curve is subtly mirrored by a bright red stiletto caught in freshly discarded gum by way of the long, foregrounded shadows both subjects cast onto the scene.

A portrait series of Paris Hilton accompanies these photographs. A personification of American goal-orientation and image consciousness—of being-as-image—Paris’ public persona is the stuff of tween girl fantasy, but shrewdly masks an empire of perfumes, EDM parties, and TV appearances. Photographing Hilton at her home, Rødland seems to search for an inside to the facade of her camera-readiness.

Ultimately, the photographs presented in I am a photograph are democratised by the light they all contain: An introspective Paris, her backlit coiffed blonde waves and undulating grey coat in Bright Doorway melds with the winding, delicately lit path of the white limousine. His subjects swathed in the din of light encroaching from behind, Rødland speaks to the psychological weight of his subjects. In his Sentences on Photography originally published in Triple Canopy, Rødland speaks of the backlit object as “a pregnant object”. To this, we are left asking, “pregnant, but with what?”
www.galerierodolphejanssen.com