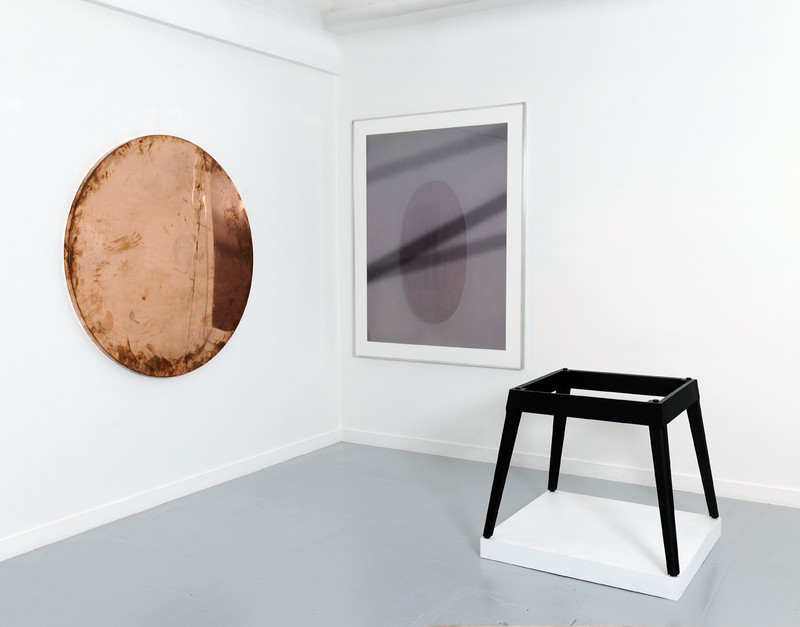 Galerie Rodolphe Janssen is pleased to announce the exhibition by Walead Beshty (1976 London, lives and works in Los Angeles). This exhibition will be the second solo show of the artist at the gallery and will present his latest works.

Since 2006, Walead Beshty has produced a series of photographic works by exposing undeveloped negatives to the X-rays of security scanners at airports. These Transparencies are made by placing large format negatives (4x5) in light-tight boxes which are themselves placed in checked-in baggage. Once the negatives have passed the X-ray machines, they are developed, scanned and printed on photographic paper. The results of this process are random and unpredictable : saturated colour fields traversed by pale light rays or, in contrast, dark shadows.

The Copper Surrogates are polished copper plates that, having temporarily replaced the desks usually located in an art gallery, bear the wear-related marks of everyday gallery activities. Here, it is the reception of the work that matters. The work is created by its receptors. By handling, using, touching it, the members of the gallery will transform the table into a work of art.

Just like the Transparencies, the Copper Surrogates are Works in Progress. They are given the status of artwork after having travelled, having been handled, marked. Defined by the machines or the hands of carriers, the works are random and unpredictable, but also unique.The production context of the work is almost always included in the work itself. Transparency and outsourcing are central to the work of Walead Beshty. He lets us discover the social space that surrounds the artwork from its conception to its reception, through its distribution and circulation. This is why the titles of the works resume so meticulously the type of film used for the production, the airports through which they passed, and the dates on which they were exposed to X-rays. The expression of transparency typifies Beshty’s work which seeks to achieve the same level of transparency that could be found in a wall drawing by Sol Lewitt, where, in the words of the artist, "a work of art can be totally beautiful but you know exactly how it was made."

Beshty refuses a model of photographic practice in which the artist’s « process, how he’s thinking materially, is kept mostly out of view, (as) something only people who are involved in photography can begin to understand ». That model he argues, « puts the viewer in a passive place, as a receiver ». If, on the other hand, the process behind a work’s creation is « always worn on its surface and not concealed or held back, (it) opens up a realm outside of (the photograph) simply being a spectacle that you confront, but makes it a thing that a viewer can be more intimate with » in L.A. Material : James Welling and Walead Beshty in conversation, North Drive Press 3, 2006

« Walead Beshty’s works clearly state that they have move, that they have been subjected to the laws that regulate the movement of objects and also people. They are produced within the framework of specific situations that are meticulously catalogued, in which the activity of an individual combines with one or more systems that channel this activity... It is, in any case, in this sense that one can interpret the following statement : ‘The question most urgent for photography is no longer what inherent meaning it may contain.. But how specific photographs construct and organize social space in a concrete and immediate way » Nicolas Bourriaud, Walead Beshty and Prosopopoeia, in Walead Beshty : Natural Histories, published by JRP/Ringier, Zurich, 2011, p. 150

The work of Walead Beshty has been the subject of many solo exhibitions throughout Europe and the United States: Malmö Konsthall, Malmö, Sweden; Hirshhorn Museum and Sculpture Garden in Washington DC; University of Michigan Museum of Art in Michigan; Hammer Museum of Art in Los Angeles and P.S.1. Contemporary Art Center in New York.His works are also present in the collections of MOMA, the Whitney Museum of American Arts and the Guggenheim Museum in New York, the Victoria & Albert Museum in London, and MOCA and LACMA in Los Angeles.
www.galerierodolphejanssen.com