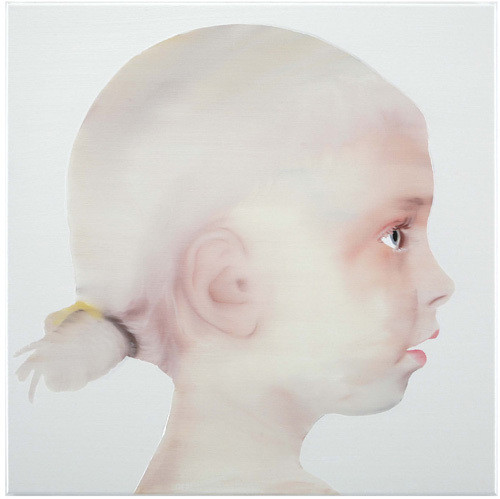 RONMANDOS is delighted to invite you to the opening of Katinka Lampe’s solo presentation. You are all welcomed to this event, which takes place from 16.00 to 19.00 on Saturday the 8th of September.
Katinka Lampe’s new paintings point to the vast body of contemporary images we all commonly know from magazines, newspapers and other media. It is possible to discern three different themes in her work, as has been done in this exposition. Certain pieces relate to more than one theme at the same time.
Her paintings depict children and adolescents in culturally and socially loaded attire, such as headscarves, capes, balaclavas or with suggestive make-up. Is there concealed within this imagery the purposeful attempt to shock the viewer? What do these visual combinations of youthful innocence and socially loaded signifiers say about Western preconceptions.
All these questions and more are raised in Katinka Lampe’s work. In spite of this however, neither the subjects of her portraits, nor their socially charged appearance, are the core theme of her work. Lampe strives to create images that agitate and unsettle the viewer and that are also consciously detached from reality. Her working process lends itself to creating such a result. She first photographs models in specific poses and attire. When she then starts to paint, any concrete link with reality is lost: children & adolescents appearing in unlikely but also disturbing ways. Katinka Lampe’s portraits are visual statements: a collection of pictorial fragments systematically combined to confront the viewer and disrupt his or her normal modes of perception.
Aside from these paintings, a careful selection of work will be presented by artists whose oeuvre has a special relation to Lampe’s work. These include work by Charles Fréger, Michelle Sank and Ruud van der Peijl.