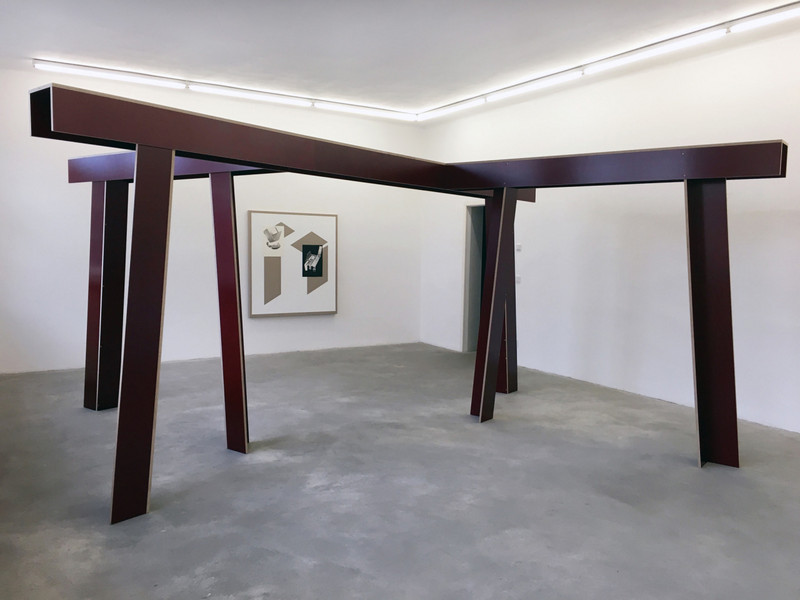 Øystein Aasan “GATES/IN (NOT) SO MANY WORDS”, Installation view at Room In Room 2016
The exhibition series Room In Room, initiated by Susanne Schuricht and Karsten Schubert, spans a conceptual bridge from architecture to architecture-related art. It brings together positions from photography, architecture and installation in a negotiation of the view into, onto and through space. Following the success of the first exhibition Room In Room we are pleased to continue the series in the new year with two individual exhibitions at the Grüntuch Ernst Lab (Grüntuch Ernst architects) in the former Jewish Girls' School in Berlin.

Room in Room 02 presents Øystein Aasan’s sculpture “GATES/IN (NOT) SO MANY WORDS” (2014), which, according to the artist, takes its inspiration form the Torii (a gate to a Shintō shrine). Consisting of two posts and two crossbeams, in traditional Japanese architecture these gates mark the transition from the profane to the sacred inner space. With his sculpture, Aasan anticipates the movement of the viewer, who can experience the exchange between inside and outside. Time distinctions such as before and after are questioned, linear time sequences are dissolved, lines of thought spatialized. The exhibition is complemented by two wall pieces from Aasan’s series “True” (2015), which will have its premiere in Berlin. In it, Aasan reuses photographs that he made fifteen years ago, applying them to architectural structures. Influenced by the presentation styles in Peggy Guggenheim’s gallery Art of This Century, in which paintings were mounted on baseball bats protruding from the walls, Øystein Aasan also draws attention to the spatial context by arranging his works on architectural grids, or what he calls “display units”.

Øystein Aasan’s works, comprising sculptures, installations, paintings, handmade books, archives, collages and architecture, investigate the properties of memory, the role of the observer and his relationship to the work of art in the exhibition context. Since 2006, Aasan has been working on his archive “Never Ending Memory”.