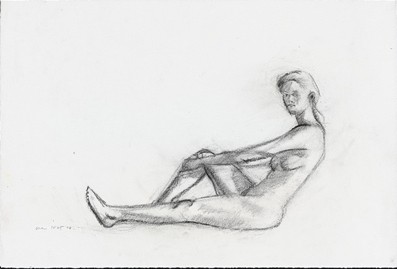 Galerie Thaddaeus Ropac is pleased to announce the opening of a second show devoted to the drawings of the American painter Alex Katz. This show, which consists of rarely seen works from 1970-2006, follows an earlier exhibition of the artist's "cartoons" and serves as a retrospective of the artist's drawings.

The palpable feeling of distance and Katz's sharp line in his works on canvas are already fully developed in his subtle drawings: "At first, it may seem surprising that the painter who exposes the eye to emptiness and attaches importance to skin and demarcation prepares his pictures in the manner of the old masters. That goes against the basic notion of Pop and media art" (Werner Spies).

Alex Katz does not consider his drawings preparatory sketches for paintings. Rather, when the artist starts to realize a drawing, long before oil touches canvas, he already has a very precise idea of the picture in his mind's eye. Carter Ratcliff once aptly called his drawings, "paintings in black and white," a statement he explains in an essay written on the occasion of the Alex Katz Drawing Retrospective at the Munson-Williams-Proctor Institute in Ithaca, NY in 1991:
"Katz does not wander through the world with a sketchbook in hand, waiting for some object or effect of light to catch his attention. First he decides to paint a picture, then he makes a few drawings specifically for that work [...]. The casual look of the line in drawings [...] shouldn't lead us to assume that, in this early stage in the process, Katz is idly playing about, waiting for some large purpose to formulate itself. Before he picks up his pencil, he has a good idea of what he wants to do."

Alex Katz was born in 1927 in Brooklyn, New York. From 1946 to 1950 he studied painting first at Cooper Union in New York and then at the Skowhegan School of Painting and Sculpture in Maine. Although Katz belongs to the Pop generation of Andy Warhol, Robert Rauschenberg, and Jasper Johns, his paintings were not given international exposure until the 1970s. Since the eighties, Katz has been the protagonist of Cool Painting, achieving global influence and becoming a virtual father figure for a generation of painters who are now between thirty and forty. A 1997 exhibition in Zurich and Hamburg called "Birth of Cool" demonstrated how the musical 'coolness' of post-war American jazz by Stan Getz or Miles Davis inspired a new style of American painting. With his figurative pictures, Alex Katz was always a crossover artist between abstraction and realism. His paintings were figurative at a time when the collective American art scene had turned away from representational art. In those days, Katz confronted the painters who insisted on an impulsive, individual style or, in the other instance, on presenting works whose representative content had been reduced to barely perceptible nuances. Katz himself has said he wanted to defend himself against Abstract Expressionism and the violent self-projection of artists like Jackson Pollock: "Without further ado, the young painter picks up the threads of America's usable past, of Georgia O'Keeffe, Fairfield Porter, Ralston Crawford, and Edward Hopper" (Werner Spies).
www.ropac.net