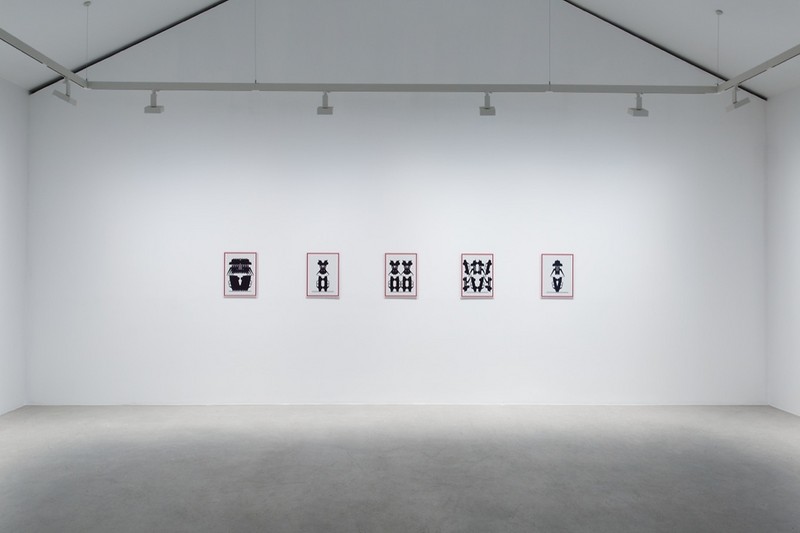 Galerie Thaddaeus Ropac shows its third solo exhibition by the artist Andreas Slominski, who lives in Berlin, Hamburg and Werder (near Potsdam). Under the title De l’amitié, Slominski combines a series of 50 screen-prints on metal – variations on the central motif of a tow-truck, the works following the aesthetic principles and universal language of international road signs. With this exhibition, Slominski takes an unusual approach to the universe of Bertolt Brecht. In the latter half of the 1930s, Brecht wrote a series of poems relating to historical Chinese poetry, some of which dates back 2,000 years. Reading these Chinese Poems can give us an idea of how Brecht developed works of his own through the study of other texts. Slominski refers explicitly to Brecht's moving folkloric poem Die Freunde [The friends] (1938), which tells of respect and friendship that knows no class boundaries. The elliptical precision, the symmetry and clarity of Brecht's language is echoed in the mirror-images, axially symmetric geometric structures and the reduction to the colours black, white and red in Slominski's pictures.

Brecht's great aesthetic and intellectual affinity with Chinese poetry and its inclination towards demotic, unsentimental, didactic expression corresponds to Slominski's sympathy for the non-exclusive quality of Brecht's writing.

Slominski's works evince an extremely democratic view of the subjects he uses. He finds beauty in objects that are generally perceived only casually, and fondly adopts them in his works.

In combination with Brecht's poem Die Freunde, the vehicles [Gefährte] are reinterpreted as friends [Gefährten]. One could perhaps make the association with a couple who are sometimes separated, sometimes together, and the common expression "to have someone in tow", probably also plays a role. The trivial information that Brecht was a keen if rather reckless car-driver seems to be an allusion on a further level of meaning.

The artists of the Cologne Progressives – a group that came together during the inter-war years, from 1920 until 1933, and worked with pictograms – could serve as an art-historical link between Brecht's poetry and Slominski's reduced symbolic language. In accordance with their self-conception as political artists and their claim to combine politics and art, the predominant artistic substance of the Cologne Progressives (protagonists were Gerd Arntz, Franz Wilhelm Seiwert, Heinrich Hoerle) concerned themes such as revolution, social and political events, or man and his place in society. The figures are not so much individuals as schematised beings exemplifying specific types. Their preferred genres were painting and graphic works, since – in keeping with their socio-political aim – these would reach a large target group. In both painting and graphic works, the realistic element receded in favour of the geometric.

Boris Groys remarked on Slominski's work: "I thus have the impression that everything Andreas Slominski does is a reference to something else. This is where the actual power lies. Fundamentally, the power to direct attention is absolute power."

Since the mid-1980s, Slominski has pursued his aesthetic exploration of frequently random perceptions of everyday life. "There is often something insidious, even impish, in the inconspicuousness of the selected objects and materialities. The function, the context and the contents are always reversed. [...] Randomness becomes a strategy. The works often have a double meaning, and the viewer sometimes lands in a trap" (Mario Kramer).

Born in Meppen in 1959, Slominski attended the Hamburg Academy of Fine Arts from 1983 until 1986. After teaching in Karlsruhe, in 2004 he succeeded Franz Erhardt Walther at the Hamburg Academy. Important solo exhibitions in the Deutsche Guggenheim Museum in Berlin (1999), the Fondazione Prada in Milan (2003) and the Serpentine Gallery in London (2005) were followed by his hitherto most comprehensive show (2006/07) in the Frankfurt Museum of Modern Art (MMK), with works from the previous 20 years. In 2010, the Goetz Collection in Munich held an exhibition of its wide range of works by Slominski, followed in 2014 by a solo exhibition in the Bremen Kunsthalle. In 2013 Slominski was awarded the major Hannah Hoch Prize by the Berlin Senate, which entailed an exhibition in the Neuer Berliner Kunstverein in 2014.
www.ropac.net