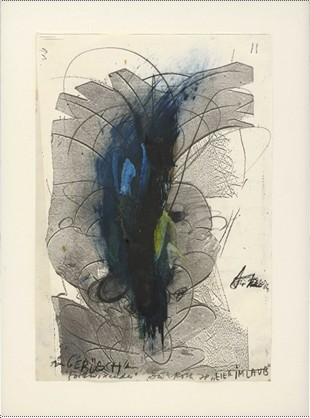 Galerie Thaddaeus Ropac is pleased to present part of the first comprehensive exhibition of collaborative works by Arnulf Rainer and Dieter Roth. Curated by Robert Fleck and organized by the Belvedere Museum in Vienna, in cooperation with the Deichtorhallen (Hamburg), this exhibition of photographs and works on paper provides an insight into one of the most exciting partnerships between avant-garde artists during the 1970s.

Arnulf Rainer (born 1929) and Dieter Roth (1930-1998) first met in the 1960s. In 1972, Roth's exhibition in Vienna presented an opportunity for producing their first drawings and prints together. Rainer - who at the time was already Austria's most influential contemporary artist on an international scale - invited Roth to spend some time with him in Vienna. In working sessions that went on for several days and nights, they created some 500 works together.

Rainer and Roth referred to their common efforts as "mixed and separated art" - depending on whether they were working fourhanded on the same motif or whether they worked individually finding different solutions for the same idea. The common feature of all those works seems to be an unbridled humour, which is entirely free of self-censorship and the inhibitions that usually marked both Rainer and Roth's individual careers as artists, thus allowing them to explore new territory. In addition, Rainer and Roth's common oeuvre is characterised by a mixture of all possible media, which rarely occurs in such a condensed and original form. In the collaboration with Roth, Rainer's invention of "expanded photography" - achieved by painting over and overdrawing photographed poses of the human body - was charged with humour and explosive colours. In their series of works, photography, painting, video (partly filmed by Peter Weibel), and drawing intertwine. Records, painted artists' books, and publications edited by the artists themselves were an attempt to become financially autonomous and break free from the art trade - a primary concern of avant-garde artists of the 1970s.
www.ropac.net