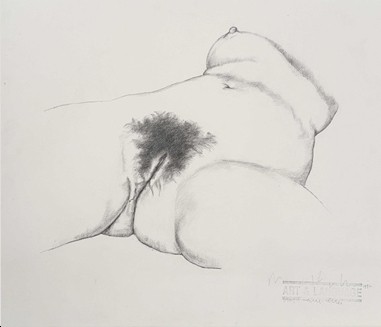 Galerie Thaddaeus Ropac is pleased to announce its first exhibition of Art & Language, opening Saturday, September 13th. In this début with Galerie Thaddaeus Ropac Paris/Salzburg, the well-known artist collaborative Art & Language, composed today of Michael Baldwin and Mel Ramsden, will present selected works on paper from the past four decades. On the occasion of this exhibition, a book-length catalogue with texts by Art & Language and the critic and art historian Barbara Rose will be published, and a conversation with the artists-moderated by Barbara Rose-will take place at Galerie Ropac Paris at 4pm on September 13th.

Seen by many as the radical bad boys of Conceptualism, Art & Language have from the very beginning taken a contrarian position within the traditional understanding of conceptual art and practice. Their art making has encompassed many forms-be it writing lyrics and performing rock and roll music with The Red Crayola in the 1960s, to constructing arcane indexical works, to writing the now historical and famous journal Art-Language, to large, sculptural installations that employ portions of their texts as building blocks. Their anarchic yet historically grounded discourse has simultaneously energized and stymied audiences since their appearance at Documenta 5 in 1972.

At Documenta 5, Art & Language presented Index, a work that invites the viewer to act as interlocutor for a complex assemblage of cross-referential texts. In partaking in the act of seeing, the viewer becomes not only a reader but participant and conversationalist in their writerly practice, engaging in Art & Language's use of intertextuality in the same manner that a viewer "reads" and draws connections between iconographic elements. One's "reading" of their works-whether on the page or on the wall-is, however, by no means an act that

aspires to achieve a certain whole meaning. To the contrary, Art & Language is very much invested in an ambivalence towards corporate art institutions and systems that is conditional upon a refusal of whole meaning.

The works presented in "Brouillages/Blurrings" carry with them the progeny of art historical movements and transatlantic debates in critical theory that have spanned the 20th century and beyond. Implicit in their process has been a powerful commitment to dismantle the traditional genres that have been the cornerstones of art historical and critical enquiry since the Renaissance. In this exhibition, Art & Language present their particular view of art historical practice-here presented as a questioning strategy for further understanding-the raison d'être of art making at this historical moment. Why and how does an artist make work in the late 20th and now in the 21st century? This exhibition displays the wide, panoramic, reverential view Art & Language takes of their predecessors-be it through nods to Pointillism in the snow-covered table and chairs of There were Sighs Trapped by Liars (I), or direct engagement with images of the European canon, such as Study for Gustave Courbet's Origine du Monde; that Courbet's piece was a point of departure is interesting given its own rich image-text history-having been owned at one point by Jacques Lacan and having inspired texts by Christine Orban and Bernard Teyssèdre as well as a larger critical dialogue surrounding its provocative subject. There is a layering upon the back of this history that occurs, as much on the page as between written lines.

The name Art & Language was first adopted in 1968, to refer to a collaborative practice that had developed over the previous two years between Michael Baldwin and Terry Atkinson, in association with David Bainbridge and Harold Hurrell. In 1970 Ian Burn and Mel Ramsden merged their separate collaboration with Art & Language. The journal Art-Language was first published in May 1969 and a second journal The Fox was published in New York in 1975-6. From 1976 the genealogical thread of Art & Language's artistic work was taken solely into the hands of Baldwin and Ramsden, with the theoretical and critical collaboration of these two with Charles Harrison. Their recent writings have appeared in such journals as Critical Inquiry and Radical Philosophy. Art & Language have appeared in many international exhibitions including further Documenta exhibitions in 1982 and 1997. They have also had several retrospectives in recent years at the Jeu de Paume, Paris (1993), P.S.1 Contemporary Art Center, New York (1999), Musée d'Art Moderne, Lille (2002) and the Centro de Arte Contemporaneo, Malaga (2004).
www.ropac.net