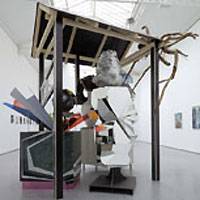 
The Galerie Thaddaeus Ropac is delighted to present new works by Bernhard Martin including , for the first time, a series of innovative sculptures.

This young German artist distinguished himself as the "enfant terrible" of his country's emerging contemporary art scene due to the fact his works escape all category and definition.

Bernhard Martin attracts attention by his novel radicality: in the Surrealist tradition the most diverse imaginable worlds are combined in his works. In Martin's sculptures, the individual forms are separated and thrown into extreme relief by their sharp contrasts. The hybridity of the forms he uses is emphasised by their lack of stylistic homogeneity: in painting photo-realistic segments are juxtaposed with gesturally expressive abstractions and two-dimensional airbrushed fields.

At the heart of this exhibition, Bernhard Martin places, a series of five sculptures. Their intricacy and the diversity of materials used, recall the same principles of construction present in his paintings: marble, alabaster, glass, bronze, plexi-glass, wood and crystal.

His sculptures are stemming from the imaginary and the fantastic. Bernhard Martin terms his programme " the idea of arbitrariness, without being arbitrary". However, in his encyclopaedic collection of objects - which frequently seem like utensils of "anti-user quality" - he never denies the classical genres of art history, which remain identifiable as landscape, still life, genre and portrait. "I am interested in worlds, islands, rarities, biotopes, contrasts that clash - in short, everyday life" - thus Martin describes the intention of his works, which form a fascinating sub-system of real s.

Bernhard Martin was born in Hanover in 1966. He studied at the Kassel Academy of Fine Arts between 1983-89 and has been living and working in Berlin since 2002. He became known to a wide public particularly through the very favourably received group exhibition of New German Painting held in the Frankfurt Kunstverein in 2003. His work is now represented in important collections such as the Museum of Contemporary Art in Geneva or the Rubell Collection in Florida. This year, Bernhard Martin exhibited in Villa Arson in Nice in the spring and participated to the thematic exhibition Max Ernst and the Moderns in the Kunsthalle in Mannheim, Germany.