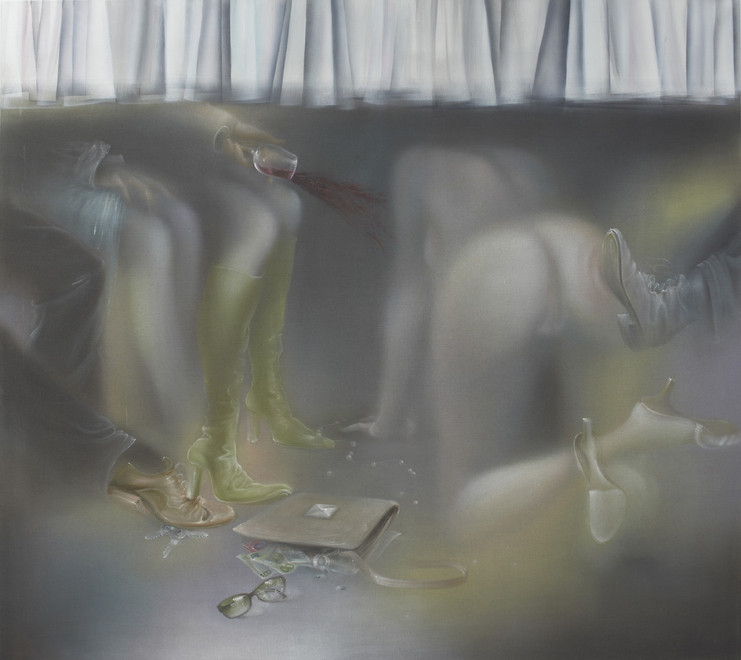 Galerie Thaddaeus Ropac Paris presents a solo exhibition by German artist Bernhard Martin. The Nothing is Our Story is the title of a new series of paintings and drawings from Martin's continuing series Diktatur der Hormone [dictatorship of the hormones], started three years ago. It was originally planned as paraphrases on the iconography of the Last Supper, but in the course of the working process, these became table scenes which got out of hand, and when strung together they are like a film sequence. The drawings in the gallery, which are dedicated to the writer Michel Houellebecq, were inspired by the artist's thoughts on the novels Plateforme and La Possibilité d'une île.

The pictures are table scenes of a modern consumerist society, showing what is happening both on the table and under it. Martin describes the society he portrays as "sickened by its own rules, unable to find satisfactory answers to questions of power, love, jealousy and longing, and choosing as a last resort cynicism and self-indulgence." Bernhard Martin is not judgemental, nor does he think in hierarchies. He is interested in the absurd, the crazy, abnormal, abstracted, nonsensical, the paradoxical and senseless. The expression "absurdism" culminates in one of the pictures, which shows a food fight (Innerhalb des Absurden gibt es keine Hierarchie [Within the absurd there is no hierarchy]). In these works Martin also poses the question of "whether the last free thought might not be in the absurd. I'd rather paint a kick in the arse than some dreary old pop star." Martin's sources of inspiration range from Otto Dix’s famous triptych Großstadt (1927/28) to the strident and ruthless elements in Quentin Tarantino's films.

In past years, Bernhard Martin was known for his radical sampling and for his combination of the most diverse styles of painting, which he mostly blended to form exuberant picture narratives. Now he uses an innovative method of lightly applying pastel shades on to the raw canvas, lending the pictures a magical atmosphere. At first glance, Martin's works seem beautiful, but on closer inspection the subversive hotbed of his encoded pictorial worlds becomes perceptible. The paint is applied so delicately that the pictures seem strangely otherworldly. Martin's new technique here shows his profound need for change. "I'm not interested in doing the same thing all my life when everything around me is constantly changing," he says. "Surely it's more in keeping with the age to develop a language to withstand this, and to try to link and combine everything."

The large-scale drawings in the gallery represent enclosed landscapes, resorts and leisure parks. The creatures depicted (based on the Seven Deadly Sins) in these landscapes – which are always at the same time puzzle pictures – can amuse themselves to their heart's content and assume different roles. Here one can love, believe, eat, kill, torture, and shed all problems, responsibility and social constraint, as in a dream.

Bernhard Martin chronicles everyday life; his deliberate recourse to the most infantile objects is typical. He calls his programme "the idea of randomness, without being random." "I paint the way others speak," he sums up. "I'm interested in worlds, islands, rarities, biotopes, contrasts that clash – in short, everyday life" – thus Martin describes the intention of his works, which form a fascinating sub-system of real appearances. "Many pictures are like vortices that suck in the gaze," Daniel Völzke once remarked in Zeit Magazine (19/2008).

Bernhard Martin was born in Hanover in 1966, and studied at the Academy of Fine Arts in Kassel (1983-89) – probably one of the youngest students ever to have been accepted into a German academy of art. He spent the ensuing years in Frankfurt am Main and Barcelona, and currently lives in London and Berlin. He became known to a wide public particularly through the very favourably received group exhibition of New German Painting held in the Frankfurt Kunstverein in 2003, and his work is now represented in important collections including the Museum of Contemporary Art in Geneva, the Rubell Collection in Florida, MoMA in New York, the Sander Collection in Berlin, the Deutsche Bank in Frankfurt, the Thyssen-Bornemisza Art Contemporary in Vienna, and the Museum of Modern Art in Salzburg. In 2005 comprehensive solo exhibitions of his work were held in the Villa Arson in Nice and the Arario Museum in Seoul. In autumn 2008 he received the Art Prize of the City of Wolfsburg, marked by a major solo exhibition in the Städtische Galerie Wolfsburg. Bernhard Martin has participated in important group exhibitions in France; his works have been shown in the Kunsthalle de Mulhouse, Musée d’Art Contemporain de Val-de-Marne in Vitry-sur-Seine (both 2010), Ancienne Douane de Strasbourg (2011) and Carré Saint-Anne Espace d’Art Contemporain in Montpellier (2013).
www.ropac.net