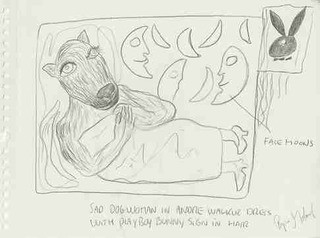 Galerie Thaddaeus Ropac is delighted to announce Bjarne Melgaard’s exhibition "The Casual Pleasure of Disappointment" in the Paris Marais gallery. He first showed with the gallery in Paris Pantin in the group exhibition "Empire State. New York Art Now", where he created a room sized installation with paintings as well as sculptures in homage to Allen Jones.

The current exhibition is Melgaard’s first solo show at the gallery. Bjarne Melgaard’s expressive paintings, drawings, sculptures and installations have achieved a unique position within the international art world. His characteristic style and provocative themes have made him a controversial, but also highly regarded artist. As New York Times art critic Roberta Smith says, “he never met a taboo he didn’t like breaking”.

The starting point for Melgaard’s exhibition "The Casual Pleasure of Disappointment" is the figure of French director Catherine Breillat and her film Abuse of Weakness (2014) which has also inspired the artist’s new eponymous fashion collection, debuting in New York in 2015. Bjarne Melgaard says “This exhibition is influenced by both Catherine Breillat as a mythical figure and as a reference in depicting emotional conflicts. My new works for Paris question the whole idea of how the beauty industry becomes a foundation for how we read each other, how we are submerged in their products and how they dominate us. They all seduce and manipulate us into believing that we can become something new or better while we are all stuck in the endless disappointment of how we observe ourselves. I wanted to do something really destructive and something nobody really has seen before. The idea is to reverse and deconstruct the boring connection between art and fashion and to deal with the obsessive and self-destructive aspects within notions of beauty.” In addition to this reflexion, the exhibition elaborates freely on Catherine Breillat’s film themes such as abuse, physical deterioration and dependency, which Melgaard has conflated with his own personal history.

Bjarne Melgaard, who often works in a collaborative manner, created a series of sculptures and paintings together with hair artist Bob Recine, fashion designer Andre Walker, furniture designer Kwangho Lee, make-up artist Kanako Takase and artist Susan Cianciolo. The fruit of this collaboration is an entire creative universe, surrounded by canvases full of doll-like figures made out of hair, mixed with paint, makeup and various other materials. Melgaard explains his collaborative approach:
“I use both paint and makeup as a medium on the canvases, which are done in collaboration with visionary hairstylist Bob Recine and veteran designer Andre Walker. Our collaboration started with my working on drawings, which I made very quickly and then turned over to Bob and Andre to interpret them, as they wanted. This allowed for a totally free way of working.” The artist suggests we see his works as an ensemble, a labyrinth of contextualized objects and as experiments of painting and sculpture in an extended field, which expresses deceit, vulnerability, extortion, emotion and desire.

Bjarne Melgaard was born in Sydney in 1967 to Norwegian parents, raised in Oslo, Norway, and works and lives in New York. He studied at the Norwegian National Academy of Fine Arts, Rijksakademie in Amsterdam from 1991 to 1992 and at the Jan van Eyck Academie in Maastricht from 1992 to 1993.
Early in his career Melgaard created controversial installations referencing subversive subcultures such as S&M and heavy metal music. Currently, his practice consists of an emphasis on expressionistic paintings and drawings, often containing text.

For his first show in New York in 2000 he exhibited sculptures of apes engaged in sex acts. In 2009 Melgaard moved permanently to New York. Since then, his works have become part of the permanent collections of major museums such as the MoMA in New York, amongst others.

In 2013/2014 the Astrup Fearnley Museum in Oslo museum opened an exhibition, curated by Gunnar B. Kvaran and Therese Möllenhoff, presenting works from the past 20 years and representing all periods of Melgaard's œuvre. In 2010, the same museum exhibited "Jealous", the first retrospective exhibition of Bjarne Melgaard.

On 31 January 2015 the Munch Museum Oslo in Norway will open the exhibition "Munch + Melgaard - The end of it all has already happened", which will last until 12 April 2015. By placing Edvard Munch's oeuvre in dialogue with works by Bjarne Melgaard, this upcoming exhibition attempts to answer the question about the critical relevance of Edvard Munch to contemporary society.
www.ropac.net