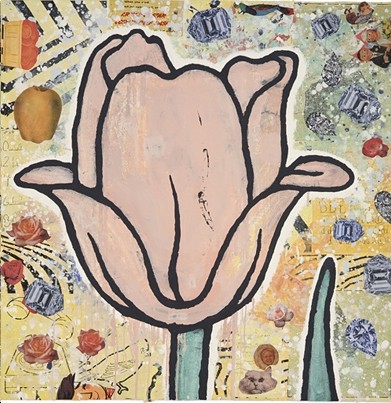 We are pleased to announce an exhibition of recent work by American artist Donald Baechler in our Drawing Space. The show will focus on the artist's most recent collages on paper.

Donald Baechler has created, with wit and humour, a metaphorical language of a popular culture which has gained him a wide reputation as a second-generation Pop Artist.

"I'm interested in discreet and very mute objects, and I've never really been interested in narrative or psychology or these things which many people read into my paintings and probably into the sculptures.", Baechler remarked recently about his work, which has been exhibited worldwide since the early 1980s.

Some twenty years ago, in an effort to re-learn drawing, Baechler set about inventing a naïve vocabulary of lines and forms. It was geared - paraphrasing the work of Jean Dubuffet - to the world of images used by children, naïve artists and the mentally ill.

Baechler's works on paper consist of collaged elements that include drawn and printed materials such as reproductions from colouring books, pages torn from children's books and various design patterns. These dense patchworks of imagery allow the artist to obtain an textural surface as background on which he then paints his emblematic central images. Recurring motifs painted on these collages are seemingly ingenuous depictions of everyday objects or human figures, flowers and trees, mostly painted in black outlines.

The leading role of the flower theme is similar to that of the beach ball, of the glass, of the various collages on paper where the clearly identifiable everyday shapes appear but with a disconcerting power. The combinations contribute, albeit in their slight variations, to underline the importance of the various levels of interpretation of his work. There is no reference either to the poetics of the interiors or to the memory's consolation found in experience, despite the presence of a few portraits.

Donald Baechler was born in Hartford (Connecticut) in 1956. He studied at Maryland Institute, College of Art, Baltimore, at Cooper Union, New York City, and at Hochschule für bildende Künste (Städelschule) in Frankfurt am Main.

Donald Baechler lives and works in New York. His sculptures and paintings are represented in many public and private collections, such as the Museum of Modern Art, Whitney Museum of American Art and Guggenheim-Museum (all in New York), in the Los Angeles Museum of Contemporary Art, the Stedelijk Museum in Amsterdam and the Centre Georges Pompidou in Paris.
www.ropac.net