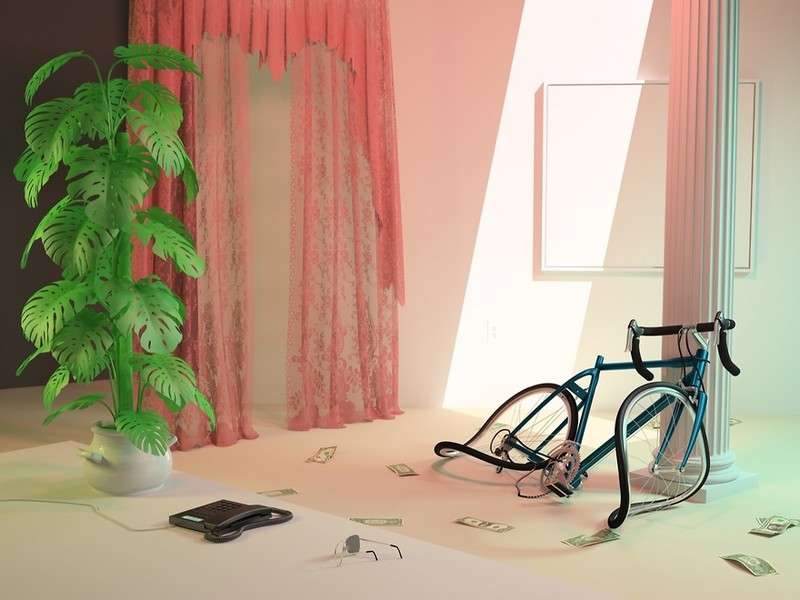 The exhibition explores the constantly shifting realities and mythologies of New York City. This ambitious intergenerational survey presents the work of twenty-five renowned and emerging New York City artists – each in depth and with important new work being shown – and suggests how they might re-imagine the relationship between their community and the life of the city. With painting, sculpture, photography, video, and installation, the artists in Empire State examine their city’s enduring relevance to the world at a moment when urban life is being redefined rapidly everywhere.

Most of the art on view is newly commissioned, complemented by other significant works made in the past three years. We are delighted to present paintings and sculptures by Jeff Koons for the first time in Paris after his acclaimed exhibition at the Palace of Versailles in 2008. Moyra Davey will create a projection room in the exhibition for Les Goddesses (2011) and Joyce Pensato will realize one of her signature site specific large-scale wall painting.

“Manhattan is an accumulation of possible disasters that never happen,” wrote celebrated architect and theorist Rem Koolhaas. For New York City, the most popular disaster myth is that it will be eclipsed. Yet in the era of globalization and with pundits routinely declaring it in decline, The Big Apple remains the world’s hegemonic force in the visual arts, with the most diverse concentration of artists, museums, arts organizations, galleries and public platforms in constant action and interplay.

The exhibition takes its title from the iconic mythologizing 2009 hip-hop anthem of the same name by rapper-turned-mogul Jay-Z and musician Alicia Keys, and references Empire, Antonio Negri and Michael Hardt’s 2000 treatise on American-led global capitalism. In 2013, Empire State will echo and engage such allegories of America’s socio-economic transition and subsequent shifts in status, confidence and power.

The artists in Empire State are grounded in institutional critique and studies of media and economics; they embrace hybridization and cross-disciplinary techniques; and they engage technology and abstraction to propose new models of expression and interpretation. One example is Dan Graham’s mirrored pavilions combine Minimalism and architecture to reflect and double the human form. Michele Abeles’s new photographic prints incorporate her installation views, as she constantly revises her autobiography according to her context.

In a new commission, Keith Edmier imagines a monumental sculpture according to the vernacular of the original Pennsylvania Station, a landmark of New York mythologizing: Designed by McKim, Mead & White and constructed in 1910 at the height of America’s industrial revolution, Penn Station was a breathtaking masterpiece of Roman Neo-Classical architecture and a testament to New York’s position as the de facto trade and culture capital of the New World. It was ignominiously demolished in 1963 at the height of New York’s craze for all things Modern.

Perhaps most importantly, Empire State emphasizes a genealogy of artists: Confronting an increasingly corporatized art world spreading globally like a new Byzantium, artists are activating ever-shifting networks of relationships, collaborations and exchanges across the boundaries of generation, gender, perspective and technique. R. H. Quaytman will present a work from her series of portraits of New York artists in a visual expression of the act of networking and the invisible tracery of power and exchange.

Empire State will be accompanied by a catalogue (Galerie Thaddaeus Ropac/Skira) featuring extended essays by the curators and by Tom McDonough, John Miller, and Eileen Myles; a visual essay by Matt Keegan; and original texts on each of the artists by leading critics and curators, including Vinzenz Brinkmann, Bonnie Clearwater, Kim Conaty, Bruce Hainley, Hans Ulrich Obrist, Tina Kukielski, and others.

Norman Rosenthal is a celebrated independent curator and critic based in London. He was Director of Exhibitions at the Royal Academy of Arts from 1977 through 2008. Rosenthal has organized dozens of critically acclaimed exhibitions, including such era-defining landmark surveys as “A New Spirit of Painting” (1981) and “Sensation” (1997).

Based in Miami, Alex Gartenfeld is Curator at the Museum of Contemporary Art North Miami, Senior Online Editor at Art in America and Interview magazines. He has co-founded two independent exhibition and project spaces in New York, and has organized exhibitions at the Zabludowicz Collection, Team Gallery and Harris Lieberman.

Jonathan Caplan studied at Columbia University, New York. He has taught at a variety of institutions, including the Architectural Association, London, and Cambridge University. He runs his own practice since 1997 specializing in projects that are related in one way or another to contemporary art.