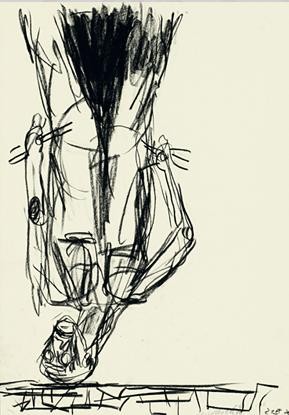 Galerie Thaddaeus Ropac is pleased to present the upcoming exhibition that will bring together works by contemporary artists and juxtapose them either with works by other artists or with other cultural references that have made an impact on their oeuvre. Some of the works being compared to those of the Western Contemporary artists' are of inestimable value (for example woodcuts by Kitagawa Utamaro and Katsushika Hokusai), while quite normal everyday objects have also been included; a pair of boots (with Not Vital), or a computer printout from the Internet selected by Jonathan Meese.

Georg Baselitz uses his own internationally renowned African collection as an important reference, particularly evident in his work of the 1980s. Baselitz's experiences also flow into more recent works, which through their colour, form, and semiotics paraphrase the topoi of African sculptures. Stephan Balkenhol also collects works of African and other non-European origin. He is known for his archaic, roughly carved wooden sculptures and will be showing a new work embodying the spirit of a 3000-year-old object found in an Egyptian grave, which he places next to his sculpture. Heinz Frank's work, Hörst du die Stille deiner Hand (Do you hear the silence of your hand) shows quite a different source of inspiration. Although he is also interested in the materiality and formal aesthetics of Egyptian art, he is primarily influenced by texts on Egypt.

A variety of European and non-European cultures are important inspiration for Not Vital. He alternates between living in the Swiss Engadin, New York, Lucca (Italy), Agadez (West Africa), and China. Since the 1980s, Vital's work has been heavily influenced by the different cultures of these places as well as by that of South-East Asia, where he has stayed for a number of prolonged periods. The materiality of his work specifically draws on the originals from Africa and Asia.

Works by Wolfgang Laib - who lives partly in his home region Baden-Württemberg and partly in India - are compared with minimalist objects from India; here the colour canon from milky rice white to saffron red is arranged in archaic simplicity. The arrangement of cylindrical heaps in a row suffices to evoke associations with Indian models.

Philip Taaffe and Francesco Clemente refer to Indian and other Asian cultures in their pictures. Ornamental art, which is often symmetrically configured, is an important source of inspiration for Taaffe, whereas Clemente is intensely preoccupied with the voluptuous aesthetics of Indian pictures of saints. In this exhibition he juxtaposes his self-portrait - interpreted as a Bengali woman - with a group of drawings by Acharya Vyakul (1930-2000). The latter are part of the artist's collection. Arnulf Rainer finds the inspiration for his crosses in particular in pictures of saints, which are essentially Russian icons.

Few Japanese artists have influenced European art history as resolutely as Kitagawa Utamaro (1753-1806) and Katsushika Hokusai (1760-1849). This is most apparent during the 19th century. At the time, the woodcuts of the two Japanese artists were disseminated throughout Europe and influenced the formation of styles characterized by linear patterns, pure colours, and asymmetric compositions. The exhibition shows that the spirit of Utamaro's and Hokusai's prints is ever present - and not exclusively amongst internationally celebrated artist's, like Alex Katz, but also in the succeeding generation, for example in the work of Philippe Bradshaw.

Another artist inspired by Japanese culture is the Chinese-Canadian artist Terence Koh. Koh juxtaposes his work against a Geisha's wig, demonstrating that he is not exclusively inspired by the work of other artists but also by other cultures.
English artist, Marc Quinn represents Kate Moss in the lotus position in his "Sphinx" series, which relates directly to a golden Buddha from Thailand.

Fuentes places works by Albrecht Dürer (1471-1528) alongside Anselm Kiefer's works for the first time. Dürer's Melancholia, one of the most distinguished prints of art history, is an important reference in Kiefer's work. Its sacral quietude, its almost meditatively pondering ductus have not only influenced individual works by Kiefer, but are qualities that are present throughout his oeuvre.

The premise of the exhibition is to document the implicit or explicit dialogue of non-European cultures with the creative work of outstanding contemporary artists. The show means to highlight new facets to the artists' works by revealing important external influences and to contribute to a reassessment of the possible ways their works are perceived by the viewer. Nothing evolves exclusively out of itself. Even ultimate creativity is always a dialogue with the strange, the ancient, the other, and things observed elsewhere.
www.ropac.net