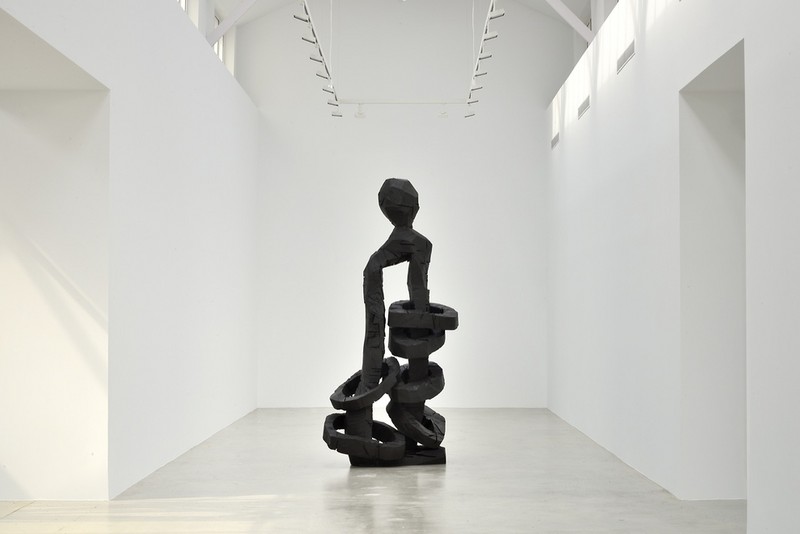 “What is Germany, really, in regard to traditional sculpture?” In a recent interview, Baselitz looked back to questions he asked himself in the 1970s: “The last thing I could think of in the way of pleasing or characteristic German sculpture after the Gothic period was the group Die Brücke, including Schmidt-Rottluff, Kirchner and Lehmbruck. When I finally arrived at this idea, I took a piece of wood and started work” (Georg Baselitz, 2011).

Baselitz's first sculpture was shown in the German Pavilion at the 1980 Venice Biennale. Since then he has made only a few.

After Edgar Degas and Paul Gauguin, artists such as Umberto Boccioni, Pablo Picasso, Henri Matisse and Max Ernst chose a readily malleable material when they had reached the limits of painting. Baselitz stands in this tradition of painters who leave their medium. He finds sculpture “a shorter way than painting”, to tackle certain problems; it is “more primitive, brutal, not as reserved [...] as painting can sometimes be”, and “less cryptic than pictures, far more direct, more legible” (Georg Baselitz, 1983). Besides this recourse to Expressionist sculpture, an important field of reference for Baselitz's sculpture is the fundamental nature of African sculpture, where specific basic types have been developed over a long period.

Baselitz works exclusively with wood, negating both the idea of doing justice to the material and that of the stuffy, conservative reputation of wood sculpture. “Any appealing form [..] any arty-crafty elegance or deliberate construction is taboo” (Georg Baselitz, 1987). With great physical effort, he hacks, stabs and saws the block of wood, taking no account of the grain. “For a sculpture to take shape, the wood has to be forcibly opened” (Uwe Schneede, 1993).

For the past ten years, Baselitz has cast limited editions of his wood sculptures in bronze at the long-established Hermann Noack fine art foundry in Berlin. Here the finest details of the sculpted wood are reproduced and burnished in black by the artist. On Baselitz’s black, unreflective surfaces, John-Paul Stonard remarks in his exhibition catalogue essay: “They betray the light absorbing wood from which they were originally carved; memory falls into them, rather than drama out of them.”

The monumental BDM Gruppe revives his childhood memories of three parading girls in his native town of Deutschbaselitz. John-Paul Stonard writes: “These village beauties [...] could not be further from the Three Graces of antiquity, shown most famously in smooth white marble by Canova, or with classical restraint by Raphael. So much has been lost or transfigured. What has survived, from a memory that must have been filtered a thousand times, is the motif of the linked arms. Not hands held, but arms linked; a rare motif in the history of art.”

In the past months Baselitz has been working on a new series titled Black Paintings. After Blackout (2009) and The Negative (2012), the series in black would seem to be a logical step. Expressive representations of birds and human figures may be discerned in these pictures, though the shades Baselitz uses render them almost invisible. The figuration is revealed more through the highly structured surface of the heavy layers of black, dark blue and brown. In his essay for the exhibition catalogue, Michael Semff writes: “The artist surprises us with a radically new pictorial concept which, in almost minimalist reduction, aims to eliminate all visible contrasts. [...] Time seems to have stopped here – not in the sense of standstill, but of exhaustion, calming 'after the battle'.” Semff points out that twenty years before he created these Black Paintings, Baselitz already described his approach to painting, which still holds today: “I try to work without experience, without training, in a way I myself don't know. I don't want continuity ... I set great store by waking sleep.” For his new series, shown in Pantin for the first time, Baselitz goes beyond this idea, confessing: “I dream of painting an invisible picture”.

Georg Baselitz was born Hans-Georg Kern in 1938 in Deutschbaselitz, Saxony. From the beginning, his work is marked by his reaction to human trauma and tragedy, particularly in relation to German history. He was also heavily influenced by Art Brut (outsider art), by the writings and drawings of Antonin Artaud and by African sculpture. Baselitzʼs works have been the subject of numerous international solo and group exhibitions since the early 1960s.

He represented Germany at the 1980 Venice Biennale, and his work was shown at documenta 5, 6 and 7 (1972, 1977 and 1982) in Kassel. The Solomon R. Guggenheim Museum in New York held his first major retrospective (1995), which went on to the Los Angeles County Museum, the Hirshhorn Museum in Washington, D.C., the Nationalgalerie in Berlin and the Musée dʼart moderne de la Ville de Paris. A further significant retrospective took place at the Royal Academy in London in 2007. In 2006 and 2007, the Pinakothek der Moderne in Munich and the Albertina in Vienna first presented Baselitz’s Remix series of paintings, and from September 2011 to January 2012, the Musée d’art moderne de la Ville de Paris held a retrospective of his sculptures. This year, the Essl Museum in Vienna organised a comprehensive retrospective to mark Baselitzʼs 75th birthday. Until September, a group of three figures, over 3 meters high, from the new sculpture series will be exhibited in the John Madejski Garden of the Victoria and Albert Museum in London. From 8 September, this work will be on show in our gallery in Pantin.

An exhibition catalogue with essays by Rudi Fuchs, Michael Semff and John-Paul Stonard will be published in conjunction with the exhibition.
www.ropac.net