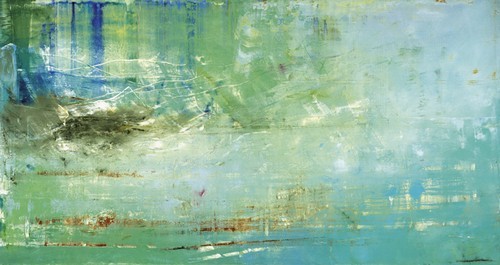 “The mind roaming freely, either in the atelier or with an actual change of location on long travels, is of importance to Scheibl. It is especially in this state of mobility on his sojourns in other cultures that his work on paper attains its own dynamic.”
- Hubert Klocker “Drawing, Photography” in Hubert Scheibl, Vice, p. 142.

Hubert Scheibl is one of the most important and significant representatives of abstractsensitive, gesture-intense painting amongst mid-generation Austrian artists, as well as being an assiduous draughtsman and photographer. This will be his first major exhibition of large format watercolors and drawings on paper in Paris; he has had many gallery and museum exhibitions in Austria, Italy and the United States during the last two decades.
Scheibl’s work both on paper and canvas is difficult to categorize. Sublime, fathomless, overwhelming and sensual, are some of the adjectives used to describe the practice. In this exhibition the drawings depict a web of black lines, a spontaneous setting of symbols and signs, spotted with colored strokes and dots. As noted by Christine Buci-Glucksmann, they come “...with their fragile curves, their jumbles of lines à la Pollock, and their simplicity that is at once childlike and cosmic.” The lush, sensuous and nervous elements of Scheibl’s paper works reveal the speed and immediacy of their graphical gesture.
We will also be displaying two large-format paintings of superimposed layers of color, with visible traces left by the scratching of the palette knife. The timeless aspect of Hubert Scheibl’s paintings derive from his remarkable skill at capturing the inner light behind the picture plane which creates a sense of deep space; it is here that the viewer is drawn, into a matrix of gesture and color unwittingly. Scheibl provides this sense of emotional freefall as the painting defines its own sense of time and place. The works on paper do the same, in a subtle and transparent way.
Hubert Scheibl was born in 1952 in Gmunden (Austria) and currently lives in Vienna. From 1976 to 1981 he studied under Max Weiler and Arnulf Rainer at the Akademie der Bildenden Künste in Vienna and started exhibiting internationally in the mid-eighties, when his work was acknowledged as a significant reaction to the then popular neo-expressionism. He has had countless solo shows and has participated in important group exhibitions in Europe and the United States. Recent major solo exhibitions include: Vice, Museum Moderner Kunst Stiftung Ludwig, Vienna (1999); Un-tiefen, Museum der Moderne, Salzburg (2006); From Monday to Monday, Rocca Sforzesca di Dozza, Bologna (2008) and his current show, Don’t Wait for the Dust to Settle (From Dusk till Dawn), running until 15 November 2009 at the Stadtgalerie im Stadmuseum, Deggendorf.
www.ropac.net