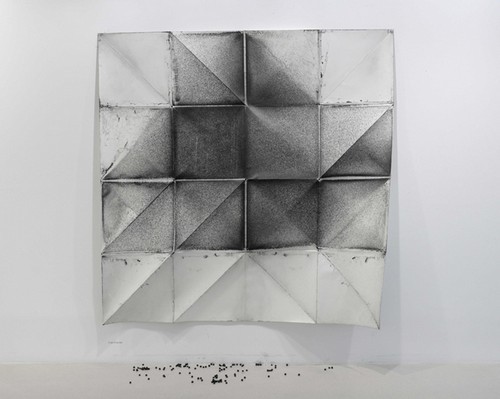 Opening in the presence of the artists on Saturday 13 February from 6pm to 8:30pm.

Galerie Thaddaeus Ropac is pelased to announce Infinite Fold, a group exhibition in the drawing space in which artists engage with and transform the paper's surface by folding it.

The Story of a Fold
In his memoirs of his studies at the Bauhaus, Hannes Beckmann relates an anecdote which reads rather like a parable. One day, Josef Albers strode into the room with a bundle of newspapers under his arm, which he gave out to the students. He said he wanted them to make it into something meaningful while respecting the material and taking into account its particular properties. What he got was a whole range of figurines: boats, animals, aeroplanes - not a very satisfactory jumble of objects. The only exception was a young Hungarian architect who had simply folded the sheet of paper lengthways then rested it on its two edges. Albers explained that this student had fully understood the nature of the material, how "naturally suited the folding process was to paper, because it made such a pliable material stiff [...] after the paper had been stood upright, it became visually active on both sides..."

A story can always be approached from several different perspectives: that of the Hungarian student is certainly the most colourful. However, by being, in a way, faithful to it, his aloof and

almost facile action enabled the paper to become a modular space. And what if imagination was the capacity to endlessly unfold and re-fold an image - a kind of infinite fold?
Folding (often combined with cutting and collage) is a technique at once rudimentary and magical: a throwback to schooldays.

Unfolded Spaces
By unfolding several surfaces from within a single one, the fold mentally induces the reverse operation, that of unfolding. By photographing the back of an open map of Australia - showing its fold-marks - Marie-Jeanne Hoffner creates a projective no-man's-land (Map Australia, 2009): with the writing space concealed from view, all we see are the remaining marks of its manipulation. Conversely, in his vintage images of mountain landscapes Clément Rodzielski works on the very body of the image, multiplying its "layers," as if in a deliberately rudimentary imitation of the scanning and computer processing of a document. He superimposes his own folds on the marks of the image's "natural" folds, so much so that they eat into the sheet and cover it with a white grid.
The performance by Diogo Pimentão is also constructed in several phases around the space contained in the sheet. He unfolds a huge paper cube that he has meticulously shaken, thereby producing rhythmic music. This cube has been filled with bits of old graphite, which thickly coat the exposed surface and produce regular geometric forms. Folding and unfolding surfaces with precise, repetitive actions, making no distinction between obverse and reverse, surface and volume - this is a procedure that could be taken as characteristic of his work in general. Walead Beshty reveals the image by unfolding and hollows out the smooth flesh of the photograph. Revisiting Man Ray and his rayograms, a technique in which light acts directly on the sensitive surface, the artist lets the light do its work on the exposed sides of folded sheets. Thus empty spaces cohabit with almost geometrical forms in inexplicable colours.

Between Plane and Volume: The Image
In Isabelle Cornaro's work a succession of photographic images recreate folding on two sheets, one in paper and the other in cardboard. She shows the two sheets folded first in the middle, then in the middle of the middle, and so on, until the two sheets form volumes, one a column placed horizontally, the other a column standing upright. Davide Balula (the only artist in this show not to work directly with paper) is showing Untitled (from the Walls Meet Walls series) (2009), the images of which he took using a mobile phone. These abstract, almost monochrome images draw our attention to that which our gaze usually only skates over. This series emphasises the folds of our perception by giving them the consistency of a suddenly activated mental space.
Simon Schubert works with the blank surface, simply applying folds to the paper. Using a personal folding technique that it took him long hours to perfect, Schubert produces images of architectural interiors. These ghostly, evanescent drawings nevertheless achieve visibility by the interaction of volume and light.

The Reverse Trace, Volume
Oscar Tuazon has "never been interested in images." He is presenting folded photographs that are almost abstract, hardened by polyester resin, to which he applies the problematics of the sculptor - how to make the object stay upright, how to combine, how to make a form exist.

Pamela Rosenkranz's Drang und Zwang series (2009) refers to a canvas by Sigmar Polke, the title of which suggests that "higher powers" commanded the artist to make a black triangle on the corner of the canvas. Having scanned then unfolded the image thus obtained, the artist gets away from the virtuosity of an artistic image to focus instead on the fascination of the form, apparently free of intentionality.

Whether as a process for elaborating a line, a surface or a volume, the fold becomes endless in a movement of constant reversal and infinite exploration of space and its lines.

Extract from the essay Infinite Fold by Joana Neves

A booklet, with Joana Neves's entire essay, as well as images of work by each artist will accompany the exhibition.