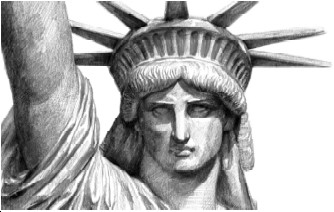 Galerie Thaddaeus Ropac is pleased to present Korean artist Jeon Joonhoʼs first show in the galleryʼs project room, which will feature a video work as well as a sculpture.
In the digitally animated video piece, Panic Disorderius (2007), as in all of Jeonʼs works, meaning lies in the details. Icons of American culture, politics, and global capitalism are symbolically charged surfaces that the artist manipulates through the addition of figures, or, equally, the erasure of selected elements. In this work, showing the Statue of Liberty, the artist suddenly zooms in to two male figures—identical twins bearing the artistʼs visage— embracing in the crown, challenging the viewer to question the complexities that often lie beneath such iconic, yet often essentializing, symbols.
Jeonʼs sculptural work consists of a mummified body clutching an animated version of an Old Master painting. A crucified figure of Christ drips blood while lightning bolts flash in the distance. This immediate encounter with both stagnant and animated human decay, coupled with the iconography of religious ritual, invites one to confront the relationships between the mortal, human self and religious faith.
Jeon Joonho was born in 1969 in Busan, South Korea. He graduated in 1997 with a Masters degree from the Chelsea College of Art & Design in London. He has had important solo shows at the Arario Gallery in Korea (2008), at Perry Rubenstein Gallery in New York (2007) and at the Pasco Arts Museum in Seoul (2004) and has participated in several group shows. In 2007 he was awarded the Grand Prix of the 27th Biennial of Graphic Art in Ljubljana and won the 2004 prize at the Gwangju Biennial. His works are included in public collections of the Contemporary Arts Museum in Houston, Seoul Museum of Art and the Guggenheim Museum in New York.
www.ropac.net