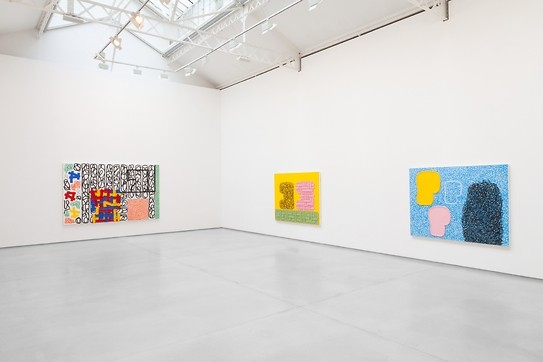 Galerie Thaddaeus Ropac is delighted to announce its fifth exhibition of Jonathan Lasker’s work. The American artist will present ten new paintings, six of which are large format and four of which are medium format.

Born in 1948 in Jersey City, Lasker studied at the School of Visual Arts in New York. He continued his studies at the California Institute of Arts (CalArts), located just outside of Los Angeles. During the ‘70s, the school was a bastion of young conceptual artists who had a tendency to dismiss painting as a naïve pursuit and a lifeless art.

Jonathan Lasker, an ardent believer in the vitality of painting as a medium for artistic expression, rebelled against the pervasiveness of conceptual art. He was inspired by two of his professors, Richard Artschwager and Susan Rothenberg, amongst others. He gives new breath to painting by introducing basic pictorial elements such as lines, colours, and (often monochrome) textures. He uses the vocabulary handed down from minimalist painters, such as Frank Stella, Brice Marden, and Robert Ryman.

Lasker developes a formal language. He treats the canvas as a zone where strokes of paint are superposed atop one another in a way that is tangible. The marks, often an assemblage of primary or secondary colours, are distinguished one from another through Lasker’s bright, intense, and sharply contrasting colour choices. The colours create fluidity or, conversely, pathways that embed themselves physically into the material, with paint building up along the edges. This sense of impasto, or of fluidity, gives the impression of very different temporalities that in turn shape the way the tableau is interpreted. Lasker’s compositions are controlled and structured; they oscillate between intuition and analysis. Lasker seeks a pictorial system that justifies itself. He brings the viewer to the brink of instant reflex, identifying with the image represented.

The titles of his tableaux are worthy of consideration: The Boundary of Luck and Evidence, Life Without Thought, and Illusions of the Self. The titles underline the parallels that the artist draws between the dialectical nature—as well as the physical nature—of his marks upon the canvas, like an abstract juxtaposition of words.

Lasker’s work has been shown recurrently in the United States and in Europe since the ‘80s: at the ICA in Philadelphia, the Hirschhorn Museum in Washington DC, the Kunsthalle Bielefeld and Stedelijk Museum in Amsterdam (1997-1998). He participated in Documenta in 1992 in Kassel. In 2003, the Reina Sofia in Madrid dedicated a major retrospective to Lasker’s work, and as did the K-20 Kunstsammlung Nord Westphalia in Düsseldorf.

His work is also represented amongst the best collections all over the world, from the MoMA and the Whitney Museum in New York to the Eli Broad Foundation in Los Angeles. In Europe, his work is included amongst the collections of the Centre Pompidou in Paris, the Reina Sofia in Madrid and the Museum Ludwig in Cologne.
www.ropac.net