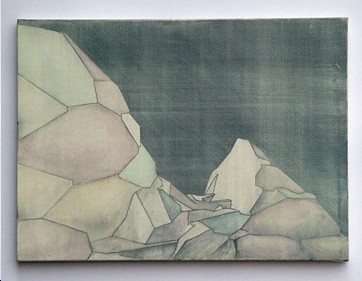 Galerie Thaddaeus Ropac is pleased to announce the upcoming exhibition of works by Lee Bul, widely acknowledged as one of the most eminent Korean artists of her generation. The Drawing space will be dedicated to new works on canvas and paper, which can be thematically grouped into two groups according to the proximity of their relationship with her previous work.
The first group show a direct visual affiliation to the artist's suspended architectural sculptures, notably the After Bruno Taut (2006-2007) and the Sternbau (2007) series, elaborate hybrids made of crystals, glass, acrylic, and metal. These sculptures are a product of the artist's recent philosophical exploration of 20th century cultural history. According to Lee Bul the sculptures, evoke the spirit of Bruno Taut, a progressive German architect most renowned for his temporary glass domed pavilion erected for the 1914 Cologne Werkbund Exhibition. Lee Bul drew inspiration from Bruno Taut's ambition to visualize his dreams, applying his "love of lightness, transparency, organic form" to realize an ameliorated, fantastical world.
The second group are further removed from the sculptural work that precedes them, venturing away from the artist's ongoing preoccupation with the human form as both a material and social entity, towards dystopian topographies and the individual's inclination to aspire to an unobtainable perfection.

Born in 1964 in Seoul, Lee Bul was initially academically trained in sculpture but her interest quickly diversified into other techniques including performance art. She incorporated her own body, contradicting general perceptions of idealized human appearance, sexuality, gender, and rebuking the repression of women within a patriarchal society. Her installation entitled Majestic Splendor (1997) at the Museum of Modern Art; rotting fish encrusted in sequins, a commentary on the ephemeral nature of beauty and the powerlessness of women, caused a furore and affirmed her global reputation as an intrepid emerging artist.
Much of her attraction lies in her ability to bring together diverse themes, at once traditional, contemporary, provocative and timeless. Lee Bul remains internationally respected and highly sought after.
Extensive solo exhibitions have been held at the Kunsthalle Bern (1999), the BAWAG Foundation Vienna (2001), the San Francisco Art Institute (2001), Le Consortium Dijon (2002), the New Museum of Contemporary Art New York (2002), The Power Plant Toronto (2002), The Museum of Contemporary Art Sydney (2004), The Fondation Cartier Pour l'Art Contemporain, Paris (2007).
www.ropac.net