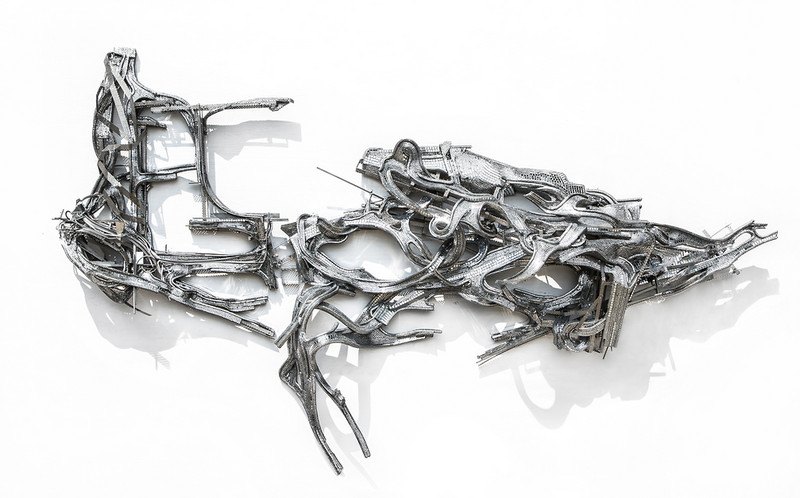 Lee Bul has been working since the 1980s, and has become one of the most noted Korean artists on the international contemporary art scene. The French public has particular reason to remember her exhibition “On Every New Shadow” at the Fondation Cartier in 2007. The Galerie Thaddaeus Ropac is delighted to be presenting a new set of her works in its Marais gallery.

Part of Lee Bul's artistic universe reflects the debates that have enlivened architecture since the social challenges of the beginnings of modernity. Architecture as practised in Park Chung-hee's South Korea was, for example, both the fruit of an impulse towards modernisation, and at the same time an instrument of control over the population, somewhat comparable to the phalanstères in the West. The 'Alpine Architecture' of Bruno Taut, creator of the Glass Pavilion for the Cologne Werkbund Exhibition in 1914, on the other hand, is often mentioned as one of her sources of inspiration. The Futurist contours of her hanging sculpture Perfect Suffering (2011) are a good illustration of what she suggests should be retained from that vision of a society exemplified by its architecture, namely transparency, lightness, and organic shapes.

In addition to the freedom of form and a certain visionary aesthetic, Lee Bul's wall sculptures give substance to a metaphorical vision of urban landscapes. The visual complexity of her metallic 'interlacings' seems to evoke the growing intensification of material and immaterial networks, whose principles of circulation, fluidity, and light she holds on to as a means towards that Utopian ambition that has always been the main characteristic of her work.

The installation made from mirrors is an architecturo/sculpturo/labyrinth that fits squarely into the perspective of her work as it reacts against totalitarian, 'Cyclopean' architecture. Like a kaleidoscope producing a partial, hallucinatory vision, the environment is distorted and fragmented, much in the way that societies today are in a relentless state of flux and subject to the tension of permanent reconstruction.

Lee Bul trained as a sculptor. She was born in 1964 in Seoul, South Korea, where she lives and works. Among her most recent exhibitions are (2012) the Mori Museum, Tokyo, and Artsonje, Séoul. She will be exhibiting at the Musée d’Art Moderne Grand-Duc Jean (MUDAM) from 5 October 2013 - 9 June 2014.
www.ropac.net