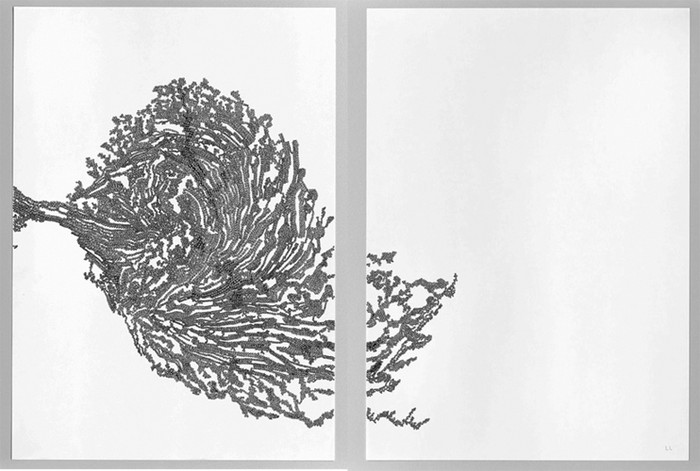 I've made work to take my revenge against injustice
both personal and political
But now standing back, I wonder
if art can be an act of forgiveness
The object stands gleaming
big enough to love anyone
forgive anything.
- Liza Lou

Galerie Thaddaeus Ropac is pleased to announce an exhibition of major works by American artist Liza Lou. For her first exhibition at the gallery in nearly seven years, Lou will present the monumental installation, American Presidents, which she began fifteen years ago and completed in 2000. Although American Presidents has been exhibited extensively in museums and institutions across the United States, this will be the first time it has been seen in Europe. The exhibition will also include recent sculptures that stem from this serial project, and an exhibition of ethereal works on paper in the first floor Drawing Space.

Liza Lou's work has captivated audiences since her first major sculpture, Kitchen-a life-size room covered entirely with glass beads was exhibited at the New Museum of Contemporary Art in New York in 1996. Lou's subject matter over the past twenty years has explored themes of American popular culture in room-size sculptures and environments such as Kitchen (1991-1996), American Presidents (1995-2000), Back Yard (1996-1999), Trailer (1998-2000), Security Fence (2005), Cell (2004-06) and Maximum Security (2007-08). The tension created between the seductive surfaces, the often sinister implications of their subject matter and the artist's labor intensive processes invites viewers to experience the work at both the level of visual wonder and critical analysis.

Similar in scale to Andy Warhol's 32 soup can paintings, and with a silver texture reminiscent of Richard Artschwager's cellotex paintings, American Presidents is a serial project with portraits of 43 US presidents made in silver and gray beads. Lou began the project in 1995 and she was still working on the portraits of the presidents during the elections of November 2000, which was one of the most controversial in US history and resulted in a recount of 170,000 votes by hand. During this debacle, Lou made a portrait with a generic shaped head and gray suit, but left the face empty. When the U.S. Supreme Court made its ruling in favor of George W. Bush, Lou filled in his face, and the portrait was unveiled later that month at the Smithsonian American Art Museum in Washington, DC. She later scraped it off, ending the project to reflect the suspended moment in US history when for 36 days, the United States did not have an elected president.

Other works in the exhibition include American Idol (2007-2009). A portrait of Barack Obama hangs next to a monochrome gun metal gray American flag standing on its own, announcing a new beginning. Pursuing the representation of the American flag in unconventional ways, Lou displays the stars and stripes reduced to a 7 cm wide ribbon that is 60 meters long. Based upon the proportions of the official American flag, Red, White, Blue (2010) is rendered as a single woven strip with 52 stars and thirteen red and white stripes. It hangs from the wall, cascading to the floor in a pool of red and white glass beads.

In the Drawing Space on the first floor, we will present a group of contemplative drawings, which reflect Lou's ongoing interest in accumulation and time-consuming process. Minuscule dots and circles form cells that replicate and cluster like nebulae across the paper's surface to sublime effect. "Repetition and accretion-that's always been the fundamental interest," Lou explains.

On the occasion of this exhibition we will publish a fully illustrated catalogue with essays by Diedrich Diedrichsen and Christoph Doswald.

Liza Lou was born in New York in 1969 and was raised in Southern California. She now lives and works in Los Angeles and Durban, South Africa, and has exhibited internationally, including the Fondation Cartier, Paris; Biennale de Lyon d'art Contemporain, Lyon; Taipei Biennale, Taiwan; the Victoria and Albert Museum, London; Boijmans Museum, Rotterdam; Museum of Contemporary Art, Helsinki; Los Angeles County Museum of Art, The New Museum, New York and The Metropolitan Museum of Art, New York. Lou has had numerous solo shows including at the Museum Kunstpalast, Düsseldorf; Henie Onstad Kunstsenter, Oslo and Fondacio Joan Miró, Barcelona. In 2002, she was a recipient of a MacArthur Foundation Fellowship.
www.ropac.net